“We are aware of the nationwide general TikTok threat, circulating throughout social media, about school violence tomorrow, December 17, 2021,” the Nampa Police Department said in a Facebook post. “Nampa PD and the Nampa School District take these threats seriously and we are working together to assess the level of the risk.”

Nampa schools are scheduled to stay open tomorrow despite the nationwide threats.

The Nampa Police Department has not identified any localized threats to our schools.

The Meridian police department has also looked into the TikTok trends.

“There is no credible information that these warnings are directed toward any West Ada School,” Meridian PD said. “We…will continue to investigate any threats to ensure appropriate school safety precautions are taken.”

Both departments are asking for parents to get involved. “Please always monitor your child’s use of all social media platforms,” Nampa PD says. “Threats against schools across the nation are often made on social media.”

“Meridian Police ask parents to speak with their children about how to use social media in a responsible way and to not spread false or inaccurate information as it can create unnecessary fear within the community.”

“While we take every threat seriously, it would be helpful to stem the tide of these rumors, reducing or eliminating the panicked responses that may occur,” Nampa School District said. “We encourage you as our partner in your child’s education to alert your school staff to any perceived threats.”

This week, the West Ada School District learned of warnings being posted on TikTok about nationwide school shootings on December 17. These posts are being shared across the country and currently there is no information that these warnings are directed toward any West Ada school. The law enforcement agencies we work with are also aware of these posts and we will work together to monitor for any updates related to these rumors and continue to investigate any further threats to ensure appropriate school safety precautions are taken.
Please speak to your child about using social media platforms in a responsible way and to not share information that may be inaccurate. This can create unnecessary fear. It is also important that if any student, parent/guardian, staff member or community member sees something suspicious to please report it to the school immediately or call police. We take all concerns about safety seriously and want to respond appropriately to keep our schools safe.

What is the TikTok Dec. 17 threat?

Schools in South Jersey and the nation have had to scramble to investigate and respond to what they’ve described as “an increase in social media posts circulating about unspecific and non-credible threats.” The day is being described on some social media platforms as “National School Shooter Day.”

While not getting into specifics, the threat appears to be centered around posts on social media platforms, including the latest one on TikTok, that have hinted at a possible threat to schools on Dec. 17. There are no specific details about the type of threat, other than a mention of “bombs” and “shootings”.

The threats appear to become a closer concern when a local student shares the item, sometimes with a comment, but not always. A review of TikTok shows how widely the general threats have spread. A review of TikTok on Thursday showed more than 4 million posts with the hashtag #december17th. 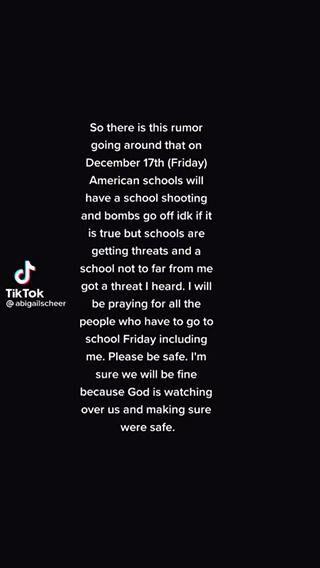 How are local districts handling the threat?

On Thursday, Hamilton Township School District sent out the following message to parents: “We are seeing an increase in social media posts circulating about unspecific and non-credible threats against our school district. The Hamilton Township School District is in constant communication with the Township of Hamilton Police Department. This relationship is extremely important, particularly when there is a potential threat to public safety involving children and staff. As we work through these threats we will continue to have increased police presence in and around our schools as we deem appropriate to safeguard the community. School will be open on our regular schedule tomorrow (Friday).”

Vineland Superintendent Alfonso Llano sent a letter to the community reminding children not to share such messages and report threats that may come to their attention.

“Messages such as this current one, circulating in numerous states, typically confuse and heighten anxiety among some school community members,” Llano said.

Stafford Township police said that though the threat has been deemed not credible, there will be a heightened police and security presence at all local schools.

Greater Egg Harbor Regional sent out a letter to parents on Wednesday also citing possible threats but saying that they were not believed to be credible.

“Both the Greater Egg Harbor Regional and Egg Harbor City School Districts along with the Egg Harbor City Police Department have received numerous inquiries regarding recent threats made against our school communities to include a TikTok trend that is being viewed as a “national threat” to schools across the US on December 17, 2021,” according to statement from Marcella Aylwin, Egg Harbor City chief of police on Thursday. “The Egg Harbor City Police Department and both school districts have been in constant communication due to these concerns. Although we have not found any of these current threats credible to our districts, we stay steadfast in ensuring the safety of students and staff alike. We will continue to have an extra police presence at our schools until the threats are resolved to each of their ends.”

“The New Jersey Office of School Preparedness and Emergency Planning has notified school districts of a general nationwide threat against schools tomorrow, Friday December 17, 2021. These threats are being posted on social media.

At this time, there is no direct or specific threat against Mainland Regional High School, but out of an abundance of caution and in response to these posts, the district will be increasing the presence of law enforcement at the high school tomorrow (12/17/21).

As always, if you see or hear something of concern, then please say something by contacting the high school or the Linwood Police Department.”

How long has this been happening?

Over the last couple of weeks, several area school districts have had either lockdowns or early dismissals because of threats.

On Tuesday, Ocean City High School students were dismissed early after receiving a report of a threat of violence. The threat was deemed not credible, according to Ocean City officials.

On Monday, police said a threat against Wildwood Middle School was found to not be credible.

Other area schools have reported similar incidents during the past two weeks.

Police from Atlantic City and Northfield were summoned to their local schools last week for reported threats posted on social media, both of which were deemed not credible.