A police officer working detail at the Nordstrom store heard gunshots ring out around 5:44 p.m.

After reports came in of shots fired, police and other emergency personnel surrounded the mall.

Oak Brook police believe that two people may have been shooting at each other. One of the suspects was shot along with three other people who are believed to be bystanders.

Police believe two people who knew each other were shooting at each other. One of the individuals who fired shots and three female bystanders were among the four shot, police said.

The suspect who fired shots is a man in his 30’s police said.

Two of the female bystanders were believed to be in their 40s and the third female was in her 20s, police said.

All four individuals were transported to area hospitals with non-life-threatening injuries.

Another woman hurt her ankle while running from gunfire.

Two guns were recovered as well.

As of 9:30 p.m., police said two people were in custody and one suspect was still at large.

The Oak Brook Police Chief said the suspect who is still at large is in the blue puffy coat pictured below: 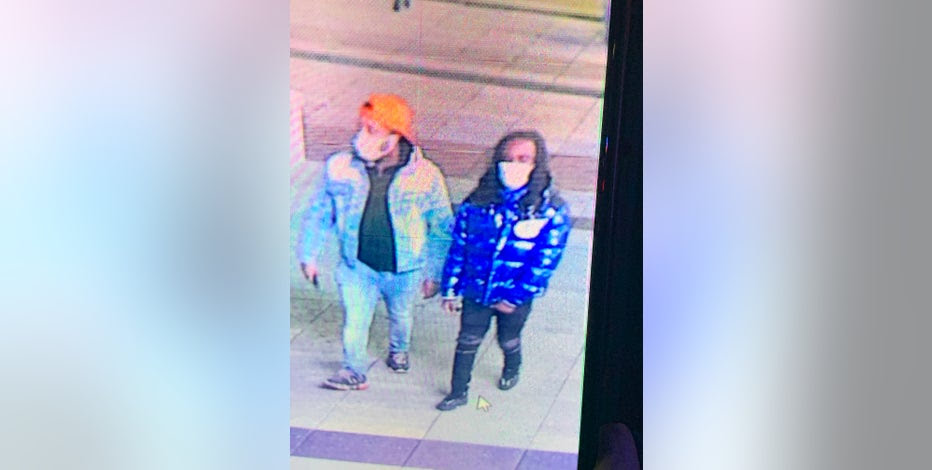 Approximately one-third of the mall had been searched and cleared by 9:30 p.m. Thursday.

Police have closed down the mall as they continue to investigate.

“Tonight’s isolated incident is extremely upsetting for our shopping center community. We are grateful to our partners at the Oakbrook Police Department for their diligence in leading this developing investigation.”

People posted to social media that they were locked down inside stores at the mall for the reported shooting. Outside the mall, police cars, fire trucks and ambulances seemed to surround just about every exit.

Police said they are working to clear the mall as of 6:30 p.m.

DuPage County board member Pete DiCianni said he was shopping nearby at the time of the shooting and saw the police response. He said he was told by his family who are locked down at the mall that the shooting happened just outside the Nordstrom store at the mall.

Witnesses said the mall was crowded with last minute Christmas shoppers at the time of the shooting.
Family members rushed to the mall to meet their loved ones as soon as the lockdown is lifted, though police have not said how long that will take.
Oak Brook police confirmed shots were fired inside the mall, but did not say under what circumstances the shooting happened.

No further details were immediately available.