Police in Grand Rapids, Michigan have released several videos showing the moment Patrick Lyoya, a 26-year-old Black man, was fatally shot in the back of the head by a white police officer during a traffic stop earlier this month.

On 13 April, the department released roughly 20 minutes of footage stitching together images from the officer’s police cruiser dashboard camera, the officer’s body-worn camera, surveillance camera footage from a nearby home, and phone video captured by a person riding in a car with Lyoya.

The footage captured the officer – who has not been named – struggling to arrest Lyoya before holding him to the ground, deploying his taser twice and then fatally shooting him.

The city’s new police chief, Eric Winstrom, cited a need for transparency in explaining his decision to make the videos public. “I view it as a tragedy. … It was a progression of sadness for me,” he said.

After the release of the footage, hundreds of people gathered outside the Grand Rapids Police Department to protest America’s latest shooting of an unarmed Black person at the hands of law enforcement. Businesses in the area boarded up in anticipation of unrest as City Manager Mark Washington warned that the videos would lead to “expressions of shock, of anger and of pain”.

The footage begins with the officer interacting with Lyoya, a native of the Democratic Republic of the Congo, after pulling him over during a traffic stop. Lyoya exits the car, the officer asks whether he speaks English, and the officer tells him the plates are not registered to the car as Lyoya asks what he did. The officer asks for his driver’s licence, and Lyoya turns to the door and asks the passenger something that is inaudible in the video. Lyoya briefly points inside the car, then closes the driver’s side door and begins to walk to the front of the car.

Body-camera footage shows the officer then saying “no, no, no, stop” and “put your hands behind your head” and grabbing Lyoya’s arms. Lyoya can then be seen pushing away and running to the sidewalk before he is tackled on a nearby lawn.

The two men struggle on the ground, and the officer tells him to “stop resisting”.

The officer also unholsters his Taser and fires towards Lyoya, who then appears to grab it from him.

At that point, the officer’s camera was “deactivated,” according to law enforcement.

“The button was hit multiple times during the incident, however, it was only held down for long enough once during the altercation,” Chief Winstrom said during a briefing on 13 April.

The passenger’s phone video captures the officer pinning Lyoya to the lawn with his face to the ground while shouting “drop the Taser”.

With his firearm unholstered, he fires a shot into Lyoya. He tells the passenger filming the video to “get back”.

The officer fired a single shot to Lyoya’s head while his face was toward the ground, according to Chief Winstrom. 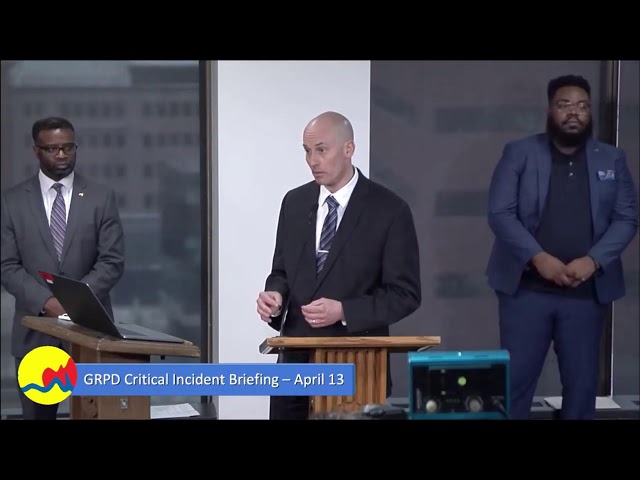 The struggle lasted roughly 90 seconds and the officer fired the Taser twice, according to police. Both shots hit the ground and did not hit Lyoya.

The officer – who has been on the force since 2015 – was placed on administrative leave as Michigan State Police begin an investigation, according to law enforcement officials.

Lyoya’s family and the ACLU of Michigan have urged the release of the footage of the shooting, which his family and Kent County Commissioner Robert Womack have described as an “execution”.

The family emigrated from the Democratic Republic of Congo in 2014. Lyoya lived in Grand Rapids while the rest of the family lives in Lansing.

Michigan Governor Gretchen Whitmer said she had spoken to the family, which includes Lyoya’s two young daughters and five siblings.

“He arrived in the United States as a refugee with his family fleeing violence. He had his whole life ahead of him,” Gov Whitmer, a Democrat, said.

Chief Winstrom also said he’d met with Lyoya’s father, Peter Lyoya, and that they both cried.

“I get it as a father. … It’s just heart-wrenching,” the chief told WOOD-TV last week.

Protests across Grand Rapids have demanded accountability in the wake of his death. Dozens of people rallied outside a city commission meeting on 12 April.

In anticipation of planned protests following release of the video footage, Mr Washington, city manager, said the city does “not currently anticipate any threats to people or property in the downtown area.”

Civil rights attorney Ben Crump, who has traveled to Michigan for the case, said the video “clearly shows that this was an unecessary, excessive and fatal use of force against an unarmed Black man who was confused by the encounter and terrified for his life.”

Mr Crump said Lyoya “never used violence against this officer” despite the officer’s use of deadly force, stemming from a traffic stop for a misdemeanour.

“We demand that the officer who killed Patrick not only be terminated … but be arrested and prosecuted,” he said in a statement.

The attorney and Lyoya family will hold a news conference on 14 April.

As in many US cities, Grand Rapids police have been occasionally criticized over the use of force, particularly against Black people, who make up 18 per cent of the population.

In November, the Michigan Supreme Court heard arguments in a lawsuit over the practice of photographing and fingerprinting people who were never charged with a crime. Grand Rapids said the policy changed in 2015.

A downtown street has been designated Breonna Taylor Way, named for the Black woman and Grand Rapids native who was killed by police in Louisville, Kentucky, during a botched drug raid in 2020.

Associated Press contributed to this report