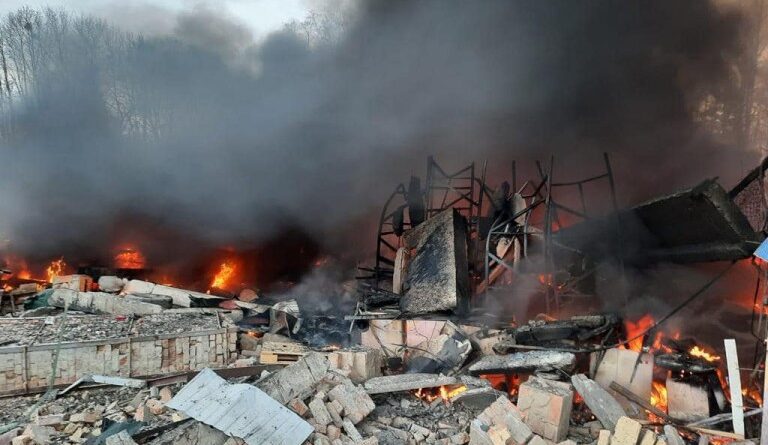 Ukrainian authorities have confirmed Russian boots are on the ground inside the country.

State Border Guard Service of Ukraine said troops ahave crossed the border after a campaign of shelling which began in the early hours of the morning.

They warned military equipment is on the move, saying troops had progressed in the Chernihiv, Sumy, Luhansk, Kharkiv regions in particular.

Troops have also been seen moving into Ukraine from the occupied Crimean peninsula.

Gun battles have broken out at multiple points and a number of injuries have been reported, with multiple deaths expected to be confirmed.

Russia launched a brutal round of air strikes on key targets this morning, paving the way for a ground campaign.

The state border force earlier said Belarusian forces had joined in with the assault, with convoys entering Ukraine from the north.

Belarus – a Russian puppet state which has been housing Kremlin forces for several weeks – lies around 50 miles north of Kyiv.

Images shared by Ukraine’s interior ministry showed one border point in the Kyiv region had been completely destroyed.

The interior ministry also said Russians tanks have entered the Luhansk region, claiming they have disguised some vehicles with the Organisation for Security and Co-operation in Europe insignia.

At least eight people have been killed and nine were wounded by the Russian shelling, an advisor to the Ukrainian Minister of Internal Affairs said on Thursday, but the real figure is feared to be in the hundreds.

Russia claims to have ‘incapacitated’ Ukraine’s military infrastructure after a wave of strategic hits on sites across the country.

Videos posted to social media showed smoke rising above cities like Odesa and Kharkiv, while explosion have also been heard around Kyiv.

The Ukrainian Minister of Foreign Affairs, Dmytro Kuleba, said that Russia has launched a ‘full-scale invasion of Ukraine’.

Two airports near the western city of Lviv – the Ivano-Frankivsk airport and one in Lutsk – were destroyed by missile strikes.

The interior ministry also confirmed an order had been signed allowing the police to provide military veterans with guns.

A statement said: ‘Veterans of internal affairs who are ready to defend Ukraine will be given weapons.’

The Ukrainian border force said it is ‘fighting the occupier’ but Russian state organs claimed it was overpowering the military.