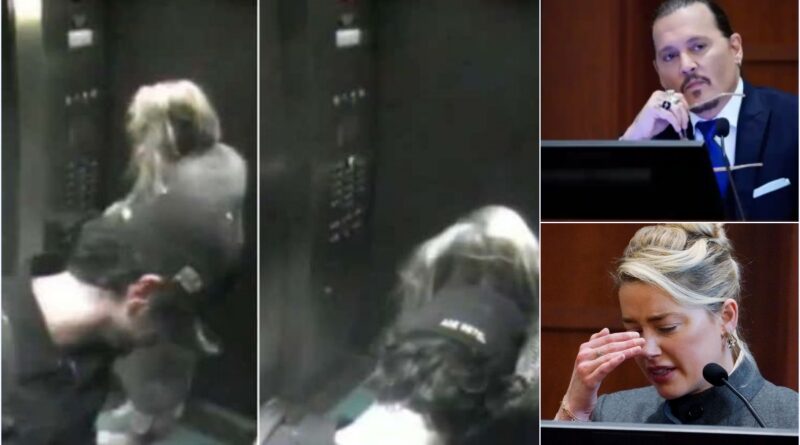 Footage has emerged of Hollywood actor James Franco visiting Amber Heard at her apartment the night before she filed for divorce from Johnny Depp.

The surveillance footage was played to jurors in the courthouse in Fairfax, Virginia, on Tuesday morning as Ms Heard endured intense cross-examination from Mr Depp’s legal team during the former couple’s high-stakes defamation trial.

The video shows Mr Franco arriving at Ms Heard’s penthouse apartment in the Eastern Columbia Building in Los Angeles at around 10.50pm on 22 May 2016.

One day earlier – on 21 May 2016 – police had been called to the apartment following a violent incident where Ms Heard alleges that Mr Depp threw a cellphone at her.

The day after the footage was taken of Mr Franco – 23 May 2016 – Ms Heard filed for divorce from Mr Depp.

Four days later on 27 May, the Aquaman actress then filed for a domestic violence restraining order from her then-husband.

In the footage from 22 May, Ms Heard is seen going down in the elevator of her apartment building at 10.56pm.

The actress – barefoot and wrapped in a large coat – then exits the elevator.

Around one minute later she returns with Mr Franco – who is wearing a large backpack – and they enter the elevator and ride it to up to her apartment.

The pair appear to rest their heads together in the footage before they exit the elevator.

Ms Heard confirmed that the footage shows her and Mr Franco going to her penthouse apartment.

CCTV video shown of James Franco getting in the elevator with #AmberHeard the night after the fight at the penthouse when police were called. #JohnnyDepp pic.twitter.com/jBm3GwdbWL

Mr Depp allegedly “hated” the actor who starred with Ms Heard in the movies Pineapple Express and The Adderall Diaries.

Ms Heard testified that her husband accused her of cheating on him with Mr Franco while the couple were on a flight from Boston to Los Angeles in 2014.

The court heard how Mr Depp allegedly flew into a rage and “kicked me in the back” causing Ms Heard to fall onto the floor inside the plane.

On the night of 21 May 2016, police were called to the couple’s Los Angeles’ penthouse following an alleged violent incident.

Ms Heard has testified that Mr Depp threw a cellphone at her face and the court was shown a photo of her bruised face.

He also allegedly struck her on the top of her head with his ringed hand, yanked her hair back, taunted her and smashed up the apartment, she testified.

When security guards and a friend at a neighbouring apartment arrived, she said Mr Depp left.

Ms Heard said she did not cooperate with the police officers at the time because she didn’t want to get her husband into trouble and also “didn’t want the world to know” about the abuse.

Mr Depp has given a different version of events of that night saying that he had gone to the apartment to collect some belongings and heard Ms Heard was laughing on the phone to a friend about an incident where faeces had been left on his bed.

He said he grabbed the phone and told her friend: “You can have her now. She’s all yours.”

Mr Depp claimed he had then “flopped the phone on the couch”.

He is suing his ex-wife for defamation over a 2018 op-ed she penned for The Washington Post where she described herself as a “a public figure representing domestic abuse”.

The Pirates of the Caribbean actor is not named in the article, which is titled “I spoke up against sexual violence – and faced our culture’s wrath. That has to change”.

However Mr Depp claims that it falsely implies that he is a domestic abuser – something that he strongly denies – and that it has left him struggling to land roles in Hollywood. He is suing for $50m.

Ms Heard is countersuing for $100m, accusing Mr Depp of orchestrating a “smear campaign” against her and describing his lawsuit as a continuation of “abuse and harassment”.