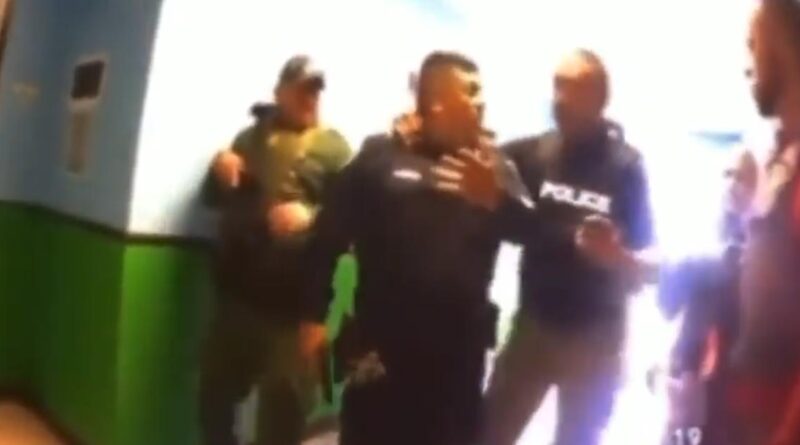 Uvalde, TX – Recently-released bodycam footage captured the moment when an Uvalde school district police officer was held back by law enforcement as he tried to get to his dying wife during the mass shooting inside her Robb Elementary School classroom (video below). Eva Mireles, 44, had contacted her husband, Uvalde Consolidated Independent Schools District Police Department (UCISDPD) Officer Ruben Ruiz, after she was shot as she attempted to shield her students from the gunman’s barrage of bullets inside her classroom on May 24, Texas Representative Joe Moody (D – El Paso) tweeted on July 13.

This is the husband of teacher Eva Mireles, who contacted him on his phone from her classroom while he was on-scene to say that she’d been shot and was dying. 1/2#txlege #Uvalde pic.twitter.com/C7m64uBmaQ

Mireles told her husband “that she’d been shot and was dying,” Moody said.

Recently-released bodycam footage showed Officer Ruiz as he pushed his way to the front of a group of law enforcement officers standing in the hallway outside the classroom where the gunman had his wife and her fourth-grade class held hostage.

“Hey hey hey – Ruben,” one officer said as another officer put his hand on Officer Ruiz’s shoulder and pulled him back.

Additional officers then escorted him out of the building, the clip showed.

By the time police stormed the classroom and killed the 18-year-old gunman, he’d been inside the school gunning down victims for more than an hour.

Nineteen children and two adults were murdered in the shooting.

Mireles was among the victims.

Critics were quick to accost Officer Ruiz after leaked security footage from the school hallway showed him looking at his cell phone during the massacre.

“This really makes my blood boil,” former speaker of the Colorado House of Representatives Terrance Carroll ranted in a tweet. “This officer is checking his phone while kids & teachers are literally dying a few doors down. And if it this couldn’t get any worse, his screensaver is the Punisher skull with a thin blue line.”

“That cop in Uvalde having his lock screen be the Punisher logo and him being scared to take on an active shooter is truly the perfect encapsulation of how cops see themselves vs who they really are,” Corado declared.

In actuality, Officer Ruiz did try to rush in to rescue his dying wife, resulting in him being held back by other unidentified officers.

“He tried to move forward into the hallway,” Texas Department of Public Safety (DPS) Director Steven McCraw previously testified during an investigative committee hearing on June 21, according to WFAA. “He was detained, and they took his gun away from him and escorted him off the scene.”

Moody gave context to the situation after the leaked surveillance video was published online.

“This is the husband of teacher Eva Mireles, who contacted him on his phone from her classroom while he was on-scene to say that she’d been shot and was dying,” Moody wrote.

I’d not planned to speak publicly until the report was released, but I couldn’t say nothing seeing this man, who’s lost everything, maligned as if he was indifferent or actively malicious. Context matters. 2/2

Moody said the snap judgements made by many who saw the footage of the officer looking at his phone during the shooting were both unfair and inaccurate.

“I’d not planned to speak publicly until the report was released, but I couldn’t say nothing seeing this man, who’s lost everything, maligned as if he was indifferent or actively malicious. Context matters,” he wrote.

“To those who haven’t bothered to read even the news that’s been reported in your rush to judgment, he attempted to engage but was removed from the building and disarmed,” Moody added. “We’ll have much to say about the police response, but no criticism of this officer.”

Watch the incident unfold in the video below:

This is the moment when the police kept Uvalde officer Ruben Ruiz, gun in-hand, from storming the classroom where his wife had been shot. He was pulled away “She said she’s shot, bro..!!” pic.twitter.com/k3pYNS52pA