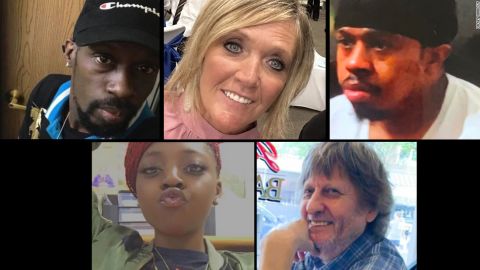 CNN — After an ordinary workday turned deadly at a Walmart in Chesapeake, Virginia, survivors and investigators are spending the Thanksgiving holiday questioning the motive of an employee who opened fire on coworkers, killing six before fatally turning the gun on himself.

Employees were preparing for an overnight shift Tuesday when a manager opened fire with a handgun in the break room just after 10 p.m., officials said.

6 victims shot and killed in a Virginia Walmart include a 16-year-old boy, authorities say

“I know this community, and I know it well. And I know that we will come together and lend a helping hand to the victims’ families,” Chesapeake Mayor Rick West said Wednesday in a video message.

The shooting, yet another example of how horrific gun violence upends American life in the most conventional settings, has left many grieving the loss of loved ones and survivors traumatized from what they witnessed. As the long journey of processing those emotions begins, questions on what could have led to the killings linger as investigators continue to dig for a motive.

Donya Prioleau was inside the employee break room when the shooter began firing at coworkers, she said.

“We don’t know what made him do this,” Prioleau said. “None of us can understand why it happened.”

The gunman was identified as Andre Bing, who was working as overnight “team lead.” The 31-year-old had been working for Walmart since 2010, the company said. Authorities have said he had one semi-automatic handgun and several ammunition magazines.

Bing shot three of Prioleau’s friends “before I took off running. Half of us didn’t believe it was real until some of us saw all the blood on the floor,” she said.

Two slain victims and the shooter were found in the break room, another victim was found at the front of the store, and three others died at the hospital, Chesapeake city officials said. Officials were still trying to determine the exact number of injuries as some people may have taken themselves to hospitals.

The mayor plans to hold a vigil Monday evening at City Park, according to a tweet from the city.

Mayor Rick West would like to invite the community to a vigil on Monday, November 28, at 6:00 p.m. at City Park so that we can honor the victims and grieve together. (2/3) pic.twitter.com/Hw348Wn7mW

“Today we are focused only of those hurt by Tuesday’s tragic event, but the police investigation continues and we expect to have additional information available tomorrow,” officials said in a Thursday tweet.

This week’s violence was at least the third mass shooting in Virginia this month, according to the Gun Violence Archive, and comes against the backdrop of grief many Americans around the country are enduring this Thanksgiving as loved ones were lost or wounded in shootings.

Just 170 miles west of Chesapeake, a 22-year-old student at the University of Virginia in Charlottesville allegedly opened fire on fellow students November 13, killing three of them on a bus returning to campus from a field trip to Washington, DC.

Over the weekend, a 22-year-old suspect shot and killed five people at an LGBTQ nightclub in Colorado Springs, Colorado, and injured 19 others, authorities said. And six months ago Thursday, a gunman in Uvalde, Texas, killed 19 students and two teachers, a tragedy in which victims are still seeking answers.

“How do you celebrate when your devastated. How do you give thanks, when you have nothing left to give. How do you fake it and smile when you wake up crying,” Brett Cross wrote Thursday of his nephew, Uziyah Garcia, who was killed in Uvalde.

Overall, the US has suffered more than 600 mass shootings so far this year, according to the Gun Violence Archive. Both the nonprofit and CNN define mass shootings as those in which four or more people are shot, not including the assailant.

Speaking to the epidemic, Arizona’s former US Rep. Gabby Giffords, who was seriously wounded in a 2011 mass shooting, tweeted a Thanksgiving Eve plea for reforms: “We cannot continue to be the nation of gun violence and mass shootings. We cannot live like this. We must act.”

We cannot continue to be the nation of gun violence and mass shootings.

‘I stayed just so they wouldn’t be alone’

In Chesapeake, the horror began less than an hour before the store was set to close after a busy holiday shopping day.

Jessie Wilczewski, who was recently hired, told CNN she was in a regularly scheduled meeting in the break room when she saw the shooter in the doorway pointing a gun.

Initially, she didn’t think what she was seeing was real, but then she felt her chest pounding and her ears ringing as a torrent of gunshots erupted, she said. At first, it “didn’t register as real,” she said, until the sound of the shots reverberated through her chest.

An employee had a gun to her forehead, others ran for their lives: Witnesses describe the Chesapeake Walmart shooting

Wilczewski hid under a table as the gunman walked down a nearby hallway. She could see some of her coworkers on the floor or lying on chairs – all still and some likely dead, she said. She stayed because she didn’t want to leave them alone.

“I could have ran out that door … and I stayed. I stayed so they wouldn’t be alone in their last moments,” Wilczewski said in a message to the families of two victims.

When the shooter returned to the break room, Wilczewski said, he told her to get out from under the table and go home.

“I had to touch the door which was covered (in blood),” she said. “I just remember gripping my bag and thinking, ‘If he’s going to shoot me in the back – well, he’s going to have to try really hard cause I’m running,’ and I booked it. … and I didn’t stop until I got to my car and then I had a meltdown.”

Lashana Hicks (left) joins other mourners Wednesday at a memorial for those killed in a mass shooting at a Walmart Supercenter in Chesapeake, Virginia. Nathan Howard/Getty Images

Briana Tyler, also a newly hired employee, had just begun her shift when the gunfire erupted.

“All of a sudden you just hear pa pa pa pa pa pa pa,” Tyler told CNN, adding she saw bullets flying just inches from her face. “It wasn’t a break in between them to where you could really try to process it.”

The shooter had a “blank stare on his face” as he looked around the room and shot at people, Tyler said.

“There were people just dropping to the floor,” she said. “Everybody was screaming, gasping, and yeah, he just walked away after that and just continued throughout the store and just kept shooting.”

What we know about the suspect

The shooter displayed some disturbing behavior in the past, other employees said.

Shaundrayia Reese, who worked with the shooter from 2015 to 2018, described him as a loner.

“He was always saying the government was watching him. He didn’t like social media and he kept black tape on his phone camera. Everyone always thought something was wrong with him,” Reese said.

Joshua Johnson, a former maintenance worker at the store, said the shooter had made ominous threats if he ever lost his job.

“He said if he ever got fired from his job, he would retaliate and people would remember who he was,” Johnson said.

Neither Johnson nor Reese reported any concerns about Bing to management, they said.

In a statement, Walmart said it was working with local law enforcement in the investigation.

“We feel tragedies like this personally and deeply. But this one is especially painful as we have learned the gunman was a Walmart associate,” President and CEO of Walmart US John Furner said in a statement. “The entire Walmart family is heartbroken. Our hearts and prayers are with those impacted.”

Virginia Walmart mass shooting: What we know about the victims

Here’s What We Know About the Walmart Shooting in Virginia

What to know: The Charlotte helicopter crash that killed 2 on I-77