POLITICS
07/05/2022 Melana 0 Comments
By Adrian Pietrzak and Ana Champeny
The cut is larger, $474 million, when measured against the Executive Budget for Fiscal Year 2021. Most of it is from an unrealistic one-time reduction in overtime expenses. The recurring reduction to the operating budget is $82 million annually, mainly from reductions in hiring.

Budget Reduction Between Fiscal Years 2020 and 2021

In fiscal year 2020 the NYPD budget, including both the department’s operating budget and central expenses, totaled $10.9 billion. Most of this—$10.5 billion—was funded directly by City taxpayers and is comprised of the $5.2 billion operating budget directly controlled by the Police Commissioner and central expenses of $5.3 billion (payments for fringe benefits and debt service) that are managed and budgeted for on a citywide basis. (See Figure 1.)

The Adopted Budget for Fiscal Year 2021 appropriated $10.2 billion in City funds to the NYPD—an operating budget of $4.9 billion and central expenses of $5.3 billion.1 The agency City-funded operating budget is projected to decrease by $345 million, or 6.6 percent, from fiscal year 2020. This year-to-year decline is greater than the 3.6 percent agency average. Some smaller agencies had larger proportional declines, including 13.1 percent ($58 million) at the Department of Parks and Recreation and 24.0 percent ($169 million) at the Department of Youth and Community Development.2 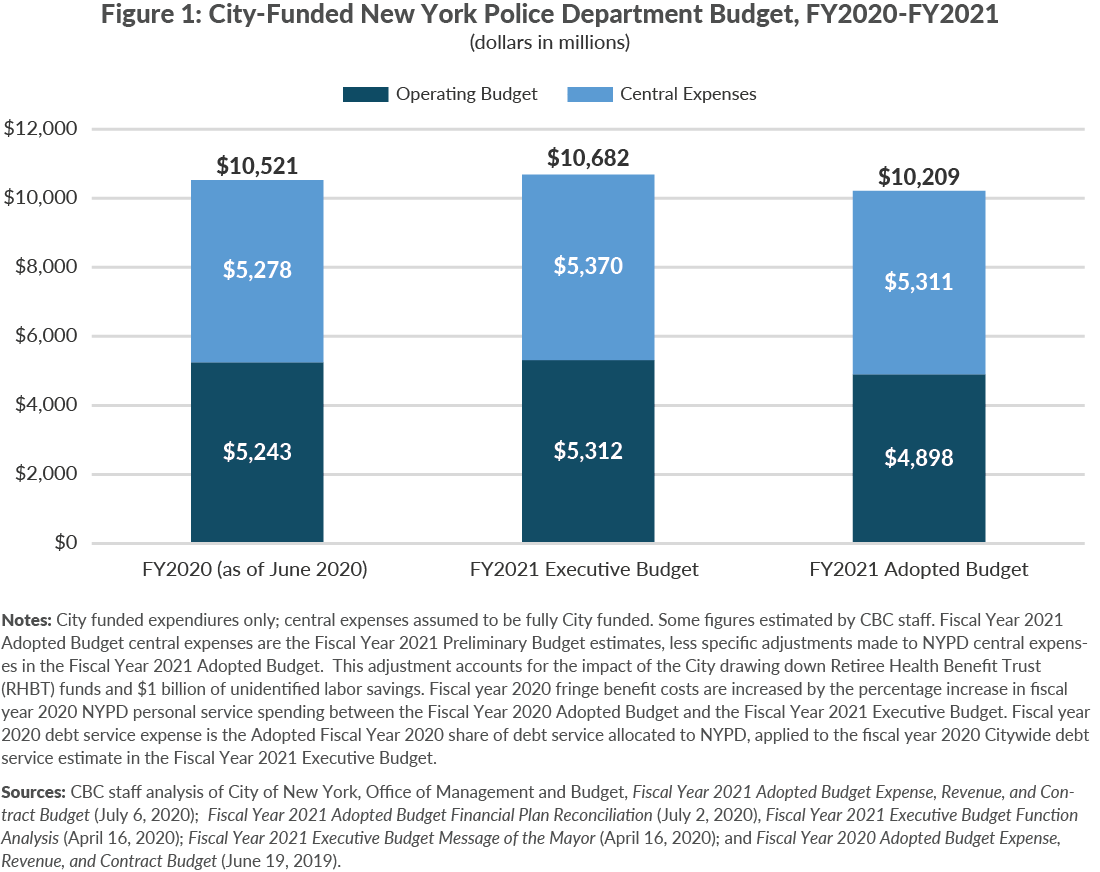 City leaders used the Executive Budget for Fiscal Year 2021 as the baseline for measuring “cuts” to the NYPD. The Executive Budget proposed a $10.7 billion NYPD City-funded budget in fiscal year 2021, which was reduced by $474 million in the Adopted Budget. (See Table 1.) Fully 75 percent of the reduction, or $354 million, is in overtime expenses. Another $81 million in savings comes from cancelling the July Police Academy Class.

In total, the NYPD’s City-funded expenses are 4.4 percent lower than planned in the Executive Budget. The operating budget was reduced 7.8 percent ($415 million) and central expenses were reduced 1.1 percent ($59 million).

The Mayor’s press release announcing the changes to the NYPD budget also reported an agreement to shift responsibility and funding for school safety agents and crossing guards to the Department of Education (DOE) for a total of $350 million.3 However, the Adopted Budget does not reflect these funding shifts, and they are not included here. A $4.5 million reduction for moving the Homeless Unit from the NYPD to the Department of Homeless Services, included in the budget, is reflected in this analysis.4 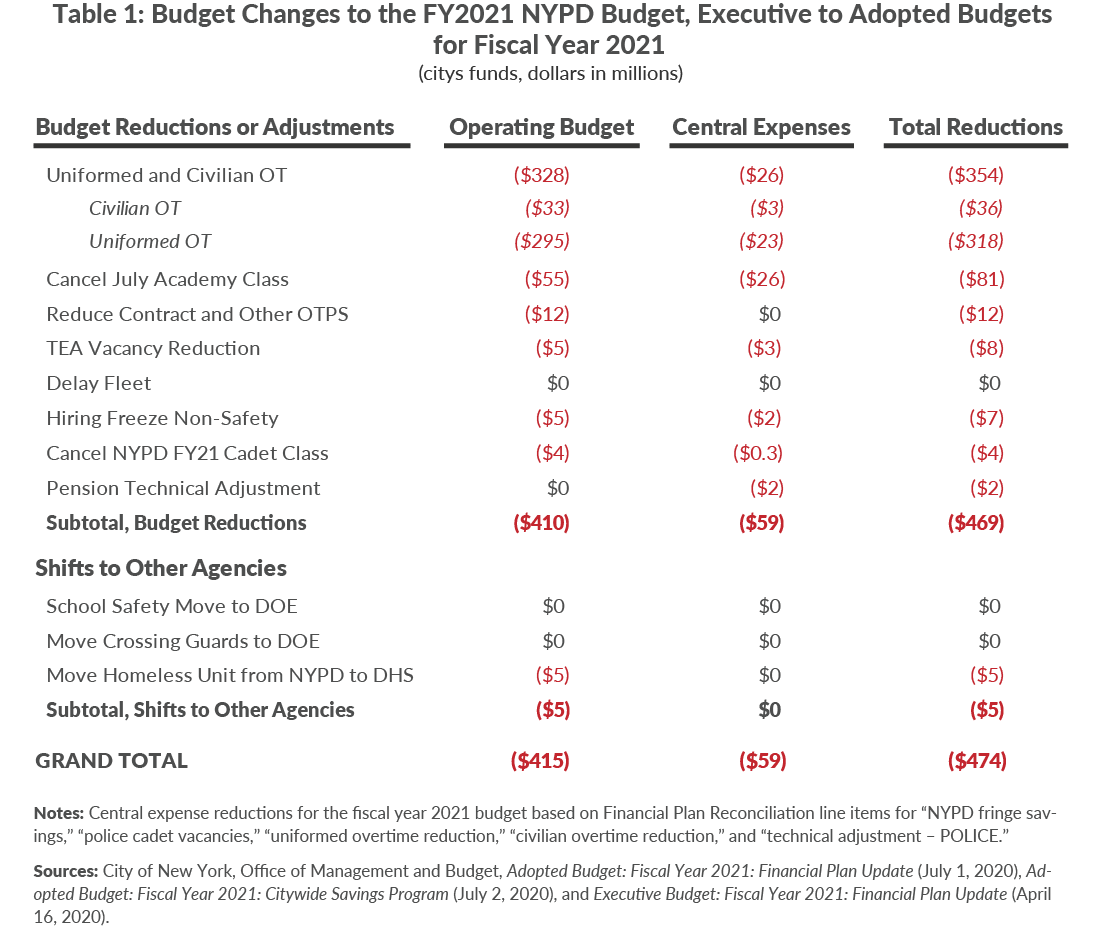 Overtime Reductions Are Not Realistic or Recurring

The budgeted overtime reduction amounts to a 56 percent cut to the fiscal year 2021 NYPD overtime budget compared to the Executive Budget, and a 67 percent decline from fiscal year 2020. (See Figure 2.) These savings are unrealistic; they were not accompanied by a plan or operational strategy, and prior efforts to reduce overtime at the uniformed agencies have been more successful in slowing growth rather than decreasing expenses. The Mayor’s Office contends fewer events (such as parades) will result in less overtime for officers; however, these events comprised 25 to 30 percent of all uniformed police overtime spending in recent years, meaning overtime reforms would need to be far-reaching and potentially negotiated with labor unions to achieve the steep reduction currently budgeted.5

In addition, these overtime savings are budgeted only for one year. As a result, the NYPD operating budget returns to $5.3 billion in fiscal years 2022 to 2024. 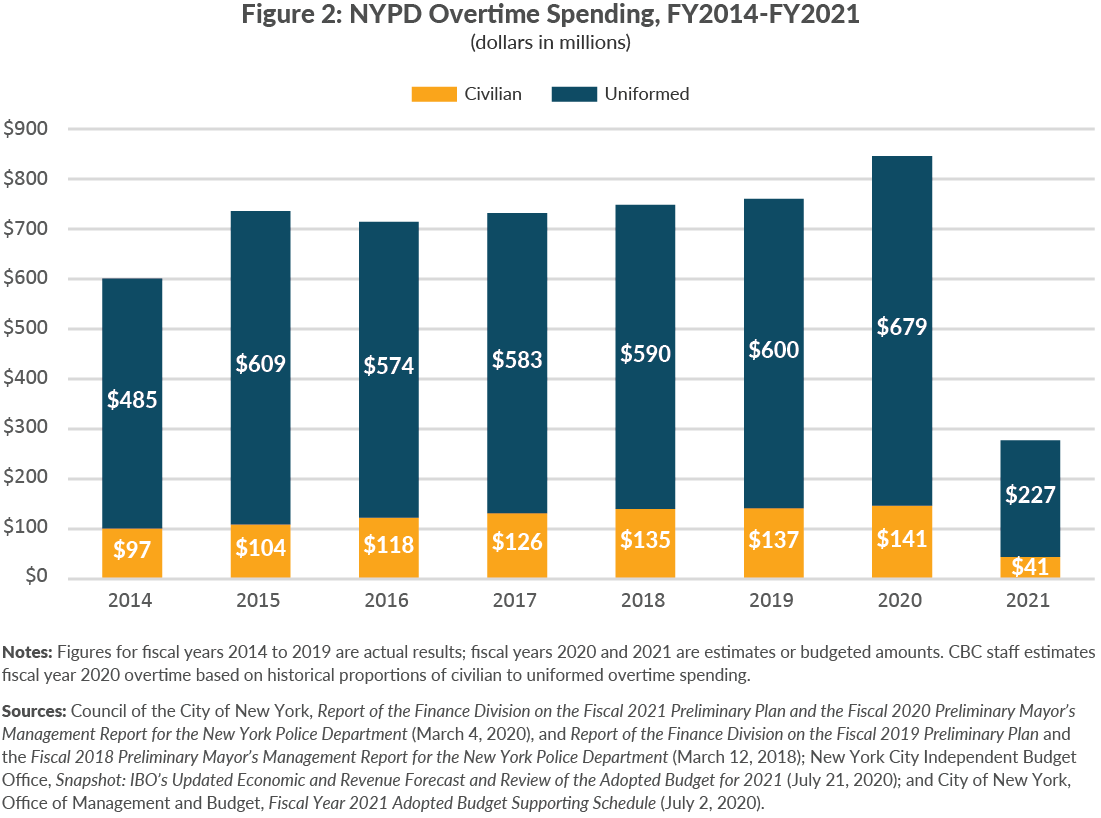 Recurring Savings are Due to Headcount Reductions

In fiscal year 2020 88 percent of spending at the NYPD was personal service costs (salaries and wages, including overtime). Most of the $82 million recurring cut reflected in the Adopted Budget is from headcount reductions attributable to cancelling the July Police Academy Class, freezing civilian hiring, reducing vacancies in Traffic Enforcement Agents, and moving the Homeless Unit out of the NYPD. 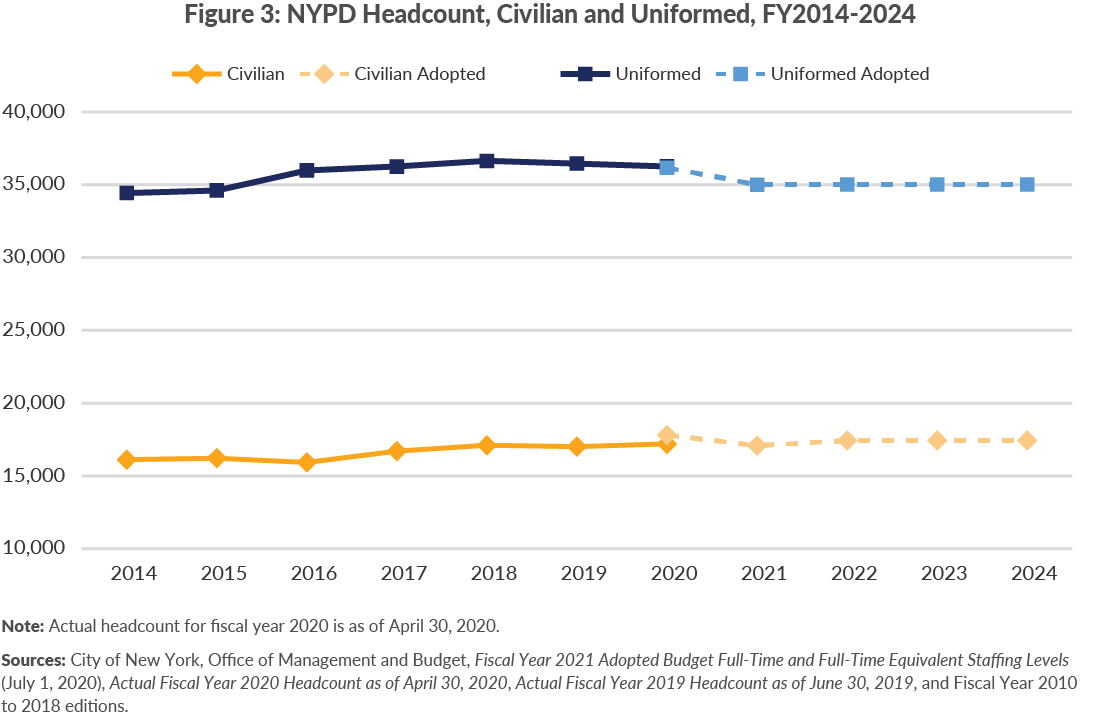