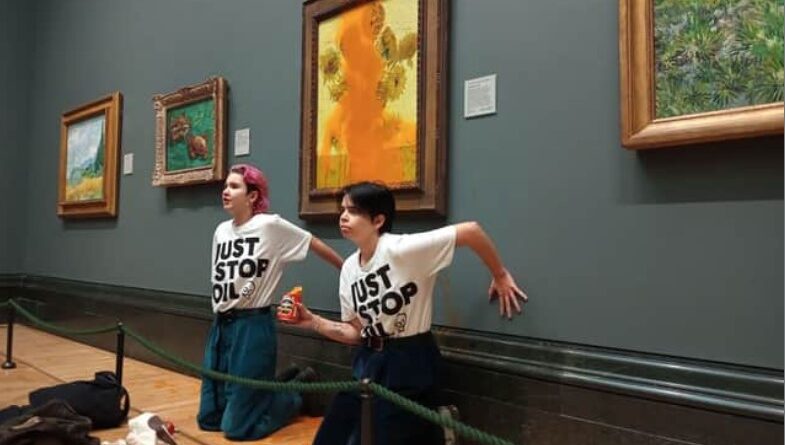 Two protesters have been arrested after throwing tinned soup at one of Vincent van Gogh’s most famous paintings to protest against fossil fuels.

The protesters, wearing Just Stop Oil T-shirts, threw two tins of Heinz Tomato soup over the master’s 1888 work Sunflowers at the National Gallery in London. The pair then kneeled down in front of the painting and appearing to glue their hands to the wall beneath it.

The incident happened shortly after 11am on Friday (14 October). Footage captured the moment the soup was thrown over the painting, appearing to cover the work and parts of the golden frame.

However it was protected by a glass casing and the National Gallery confirmed it was “unharmed”. Here is all you need to know:

Why did the protesters threw soup at the painting?

Following the incident in which tomato soup was thrown at Sunflowers, which is currently being held at the National Gallery, visitors were then shortly escorted out by security, who then shut the doors to room 43 of the gallery where the painting hangs.

The protesters were later seen being put into a police van at the back entrance of the gallery.

The National Gallery said: “At just after 11am this morning two people entered Room 43 of the National Gallery. The pair appeared to glue themselves to the wall adjacent to Van Gogh’s Sunflowers (1888). They also threw a red substance – what appears to be tomato soup – over the painting.

“The room was cleared of visitors and police were called. Officers are now on the scene. There is some minor damage to the frame but the painting is unharmed.” 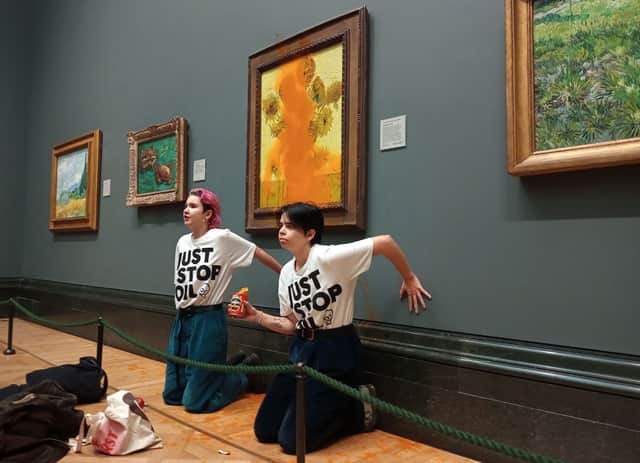 What have the police said about the incident?

The Metropolitan Police said: “Officers were rapidly on scene at the National Gallery this morning after two Just Stop Oil protesters threw a substance over a painting and then glued themselves to a wall. Both have been arrested for criminal damage and aggravated trespass. Specialist officers have now un-glued them and they have been taken into custody to a central London police station.”

It was not the only incident involving Just Stop Oil protesters in the capital on Friday. Demonstrators also blocked the road in front of the Metropolitan Police’s headquarters and a sign for New Scotland Yard was covered with yellow paint.

The force said it arrested 24 protesters on suspicion of wilful obstruction of the highway and conspiracy to commit criminal damage. At least eight officers continued to surround the New Scotland Yard rotating sign, which remains covered in paint.

Sunflowers is the second, more famous, Van Gogh painting to be targeted by the group, with two climate activists glueing themselves to his 1889 Peach Trees in Blossom, exhibited at the Courtauld Gallery, at the end of June.

Painted in Arles in the south of France in August 1888, Van Gogh’s painting shows fifteen sunflowers standing in a yellow pot against a yellow background.

The work is also the second from the National Gallery to be selected as a target for protest action by Just Stop Oil, with two supporters glueing themselves to John Constable’s The Hay Wain on 4 July. They had attached their own “reimagined version” to the portrait, before glueing themselves to the frame.

Representatives from the organisation have also targeted a landscape painting by Horatio McCulloch, My Heart’s In The Highlands, in Glasgow’s Kelvingrove Art Gallery and Museum, as well as a 500-year-old copy of Leonardo Da Vinci’s Last Summer in London’s Royal Academy.