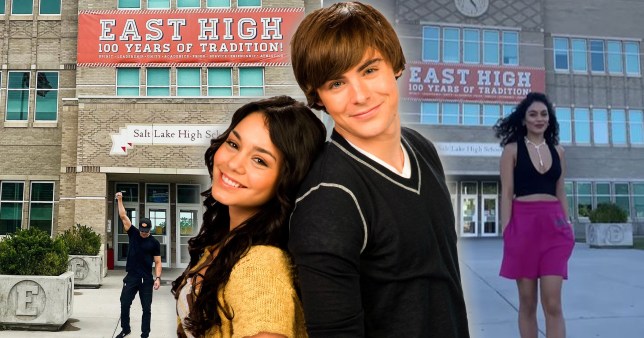 It may be 16 years since the first High School Musical movie came out, but Zac Efron and Vanessa Hudgens still know how to send fans of the film franchise into an absolute frenzy.

In 2006, the world was introduced to the adorable duo that is Troy Bolton (Zac) and Gabriella Montez (Vanessa), as the basketball player and maths whizz discovered a shared love of singing (and each other).

While their real-life romance ended in 2010, the magic of High School Musical remains very much alive among the fandom, with both Zac and Vanessa paying a visit to their roots in recent weeks.

Yesterday, Zac, 34, paid homage to 1980s classic The Breakfast Club while standing outside Salt Lake High School East in Utah, where the majority of the Disney Channel movie was filmed.

Copying The Breakfast Club’s Judd Nelson, when his character John Bender held his fist in the air at the end of the John Hughes flick, Zac captioned his Instagram post: ‘Don’t you… Forget about me,’ in reference to the Simple Minds song.

Meanwhile, one fan expressed their hope that Zac’s post could mean that he and Vanessa may guest star on High School Musical: The Musical: The Series.

‘But but but… Vanessa posted a similar one a few weeks ago. What does this mean?’ someone else remarked.

Speaking of Vanessa’s post, the 33-year-old did indeed share a very similar post just under a month ago, filming herself outside the school’s entrance in an almost identical spot to her former co-star.

In the caption, she wrote: ‘Do you remember in kindergarten how you’d meet a kid and know nothing about them, then 10 seconds later you’re playing like you’re best friends because you didn’t have to be anything but yourself?’

‘Crying in nostalgia,’ one person commented, while another wrote: ‘Once a Wildcat, Always a Wildcat.’

If Zac and Vanessa were to reprise their roles… we honestly don’t know if we could handle it.

Vanessa recently admitted that she’s a big fan of Love Island, revealing that she loves watching the reality show get ‘messy along the way’.