A jury has returned guilty verdicts against all three men charged in the murder of Ahmaud Arbery.

Travis McMichael, who fired the fatal shots, was convicted Wednesday on all counts, including the charge of malice murder. His father, Gregory McMichael, and neighbor, William “Roddie” Bryan, were convicted of felony murder and other charges.

It took national outcry and a video of the shooting for charges to be brought in the case, 74 days after Arbery was shot and killed in February 2020.

Arbery was Black and the three men charged with his murder are White. Prosecutors say Arbery was out for a jog when the suspects chased him through the neighborhood, cornered him with their pickup trucks and shot him. The defendants say they thought he was a burglary suspect, and that they acted in self-defense.

Their assumptions, prosecutors say, were false, and a 911 call made by one of the defendants suggested the central role race would play in the case:

“All of this, and what does he say his emergency is?” lead prosecutor Linda Dunikoski told the jury. “‘I’m out here in Satilla Shores, and there’s a Black male running down the street.’ That’s the emergency.”

Who was Ahmaud Arbery?

Ahmaud Arbery was 25 years old and was born and raised in and around Brunswick, Georgia. At Brunswick High School, Arbery was a star football player known for his speed. Exercising continued to be important to him and was known to run often through the neighborhood.

“Ahmaud just wasn’t a jogger that was jogging in that neighborhood in south Georgia,” his mother, Wanda Cooper-Jones, said in an interview with “CBS Mornings.”

He worked various jobs after high school and had recently enrolled at a technical college. 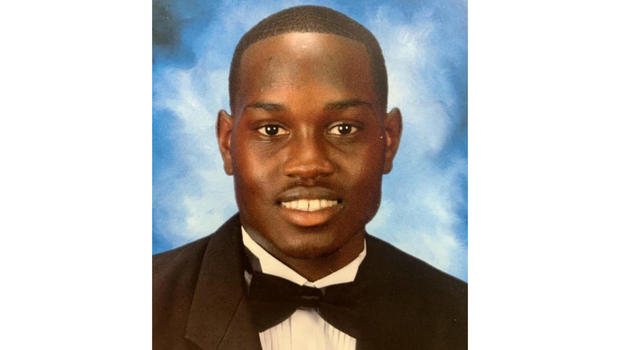 How was he killed?

On February 23, 2020, Ahmaud Arbery went out for a jog in Brunswick, Georgia.

Travis McMichael called 911 after claiming to see Arbery walk into an open home that was under construction in the Satilla Shores subdivision. Surveillance footage from the home shows Arbery walk inside, look around and leave.

Travis and his father Gregory McMichael armed themselves and chased after the 25-year-old in Travis McMichael’s pickup truck. They said they thought he was a burglary suspect after a string of thefts in the neighborhood. A neighbor of the McMichaels, William “Roddie” Bryan, joined in with his own vehicle and recorded cellphone video as they tried to stop Arbery.

At trial, a  police officer testified that Gregory McMichael told law enforcement they had Arbery “trapped like a rat.”

Travis McMichael, who was armed with a shotgun, scuffled with Arbery in the street and then fired three times, hitting Arbery twice at close range. The shots created a hole in his chest and massive bleeding, according to the medical examiner, Dr. Edmund Donoghue, who testified at the trial.

“Is there anything law enforcement or EMS could have done to save his life at the scene?” prosecutor Dunikoski asked the medical examiner.

“I don’t think so. No,” Donoghue replied.

The suspects claimed to police that they acted in self-defense during the confrontation that resulted in Arbery’s death. Travis McMichael testified that Arbery struck him and was trying to grab his gun.

The disturbing video of Arbery’s final moments, filmed by Bryan on his cellphone, drew a national outcry. An investigator later testified that Bryan said he heard Travis McMichael using a racial slur as Arbery lay dying, which Travis denies.

Two and a half months passed before they were charged with murder and aggravated assault, shortly after the state began investigating and the video of the shooting became public.

Who are the men that were found guilty?

Each of the three defendants faced nine criminal counts:

The three men also faced federal hate crimes charges. In April, the Justice Department returned an indictment alleging that Gregory McMichael, Travis McMichael and William “Roddie” Bryan used force and threats of force to intimidate and interfere with Arbery’s right to use a public street because of his race. It also alleges all three defendants attempted to unlawfully seize and confine Arbery and detain him against his will.

After the murder trial in state court comes to an end, the legal saga will continue in federal court. The trial in the federal case is scheduled to begin on February 7, 2022.

Prosecutors say defendants acted on “assumptions” instead of evidence.

Prosecutors argued the defendants had no legitimate reason to chase down and confront Arbery.

The lead prosecutor, Linda Dunikoski, told the jury, “All three of these defendants did everything they did based on assumptions — not on facts, not on evidence.”

The state rested its case after calling 23 witnesses over eight days of testimony. They showed the jury graphic photos of the shotgun wounds that punched a gaping hole in Arbery’s chest and unleashed bleeding that stained his white T-shirt entirely red.

Due to the state of his wounds, prosecutors asked Dr. Edmund Donoghue, the state medical examiner who performed Arbery’s autopsy, how the 25-year-old was able to fight back after the first gunshot. Donoghue called it a “fight or flight reaction” which raised Arbery’s heart rate and blood pressure while sending adrenaline coursing through his body.

The same police officer who testified about Gregory McMichael’s statements to law enforcement read from a transcript of the interview that took place at police headquarters hours after the shooting. Glynn County Police Sergeant Roderic Nohilly told the jury he spoke with Gregory McMichael, who said Arbery “wasn’t out for no Sunday jog. He was getting the hell out of there.”

He later told police about shouting to Arbery: “I said, ‘Stop,’ you know, ‘I’ll blow your f***ing head off,’ or something. I was trying to convey to this guy we’re not playing, you know?”

Gregory McMichael previously worked as an investigator for the local district attorney’s office, which led to three local prosecutors recusing themselves before the trial due to conflicts of interest. The Georgia Attorney General’s Office has assigned the Cobb County District Attorney’s Office to prosecute the case.

In September, former Brunswick District Attorney Jackie Johnson was indicted on charges of violating the oath of a public officer and obstruction of a police officer for her conduct in the murder investigation. The indictment said Johnson failed “to treat Ahmaud Arbery and his family fairly and with dignity” by using her past work with Gregory McMichael as motivation to shield the men from charges.

The defense argued the men acted in self-defense.

The defense team argued that the three men acted out of self-defense and within the legal grounds of making a “citizen’s arrest.” One year after the killing, Georgia lawmakers repealed the state’s “citizen’s arrest” law, which dated back to the Civil War.

“They got in the truck to pursue Mr. Arbery for the purpose of detaining him long enough for the police to arrive to take over and investigate whether in fact he had committed any crimes,” said defense attorney Franklin Hogue. “That turned from a citizen’s arrest into self-defense.”

Travis McMichael took the stand in his own defense, testifying that he had heard about break-ins in the neighborhood and had previously seen a Black man “lurking” and “creeping” around a house under construction.

When his father spotted Arbery on February 23, they decided to drive up alongside him and question him. Travis McMichael acknowledged under cross-examination that Arbery did not threaten them. But as the confrontation ensued, McMichael said he was forced to make a split-second “life-or-death” decision when he said Arbery grabbed for his shotgun.

“It was the most traumatic event of my life,” he told the court.

An attorney for one of the defendants also made requests to have the Reverends Al Sharpton and Jesse Jackson removed from the courtroom after they had separately attended court proceedings with Arbery’s parents. Attorney Kevin Gough, who represents Bryan,  said he  feared Sharpton was trying to influence the jury, telling the judge, “we don’t want any more Black pastors coming in here.”

Several days later, Gough renewed his concerns with respect to Jackson and requested a mistrial: “How many pastors does the Arbery family have? We had the Reverend Al Sharpton last week.”

He added: “There is no reason for these prominent icons in the civil rights movement to be here. With all due respect, I would suggest, whether intended or not, that inevitably a juror is going to be influenced by their presence in the courtroom.”

Superior Court Judge Timothy Walmsley repeatedly declined to ask Jackson to leave and denied the request for a mistrial. Courtrooms are normally open to the public; however, the judge has instituted limited seating for the public due to the coronavirus pandemic.

In a case where race played a key role, only one Black juror and 11 Whites were chosen to decide the fate of the three defendants. State prosecutors objected, arguing that several potential Black jurors were cut because of their race.

The judge conceded that “intentional discrimination” by defense attorneys appeared to have shaped jury selection but said his authority to intervene was limited under Georgia law. In Glynn County, where Arbery was killed and the trial is being held, Black people account for nearly 27% of the population of 85,000, according to the U.S. Census Bureau. The judge said 25% of the pool from which the final jury was chosen was Black.

The lead prosecutor said many prospective jurors who were questioned in open court had expressed strong opinions about the case. 1,000 jury duty notices were mailed and a pool of nearly 200 people were questioned by the judge and attorneys at the courthouse.