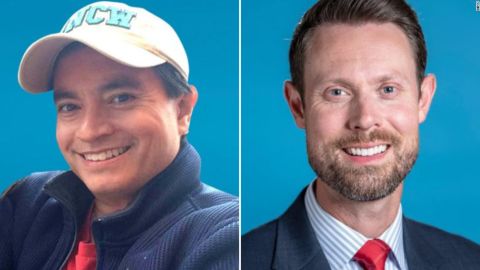 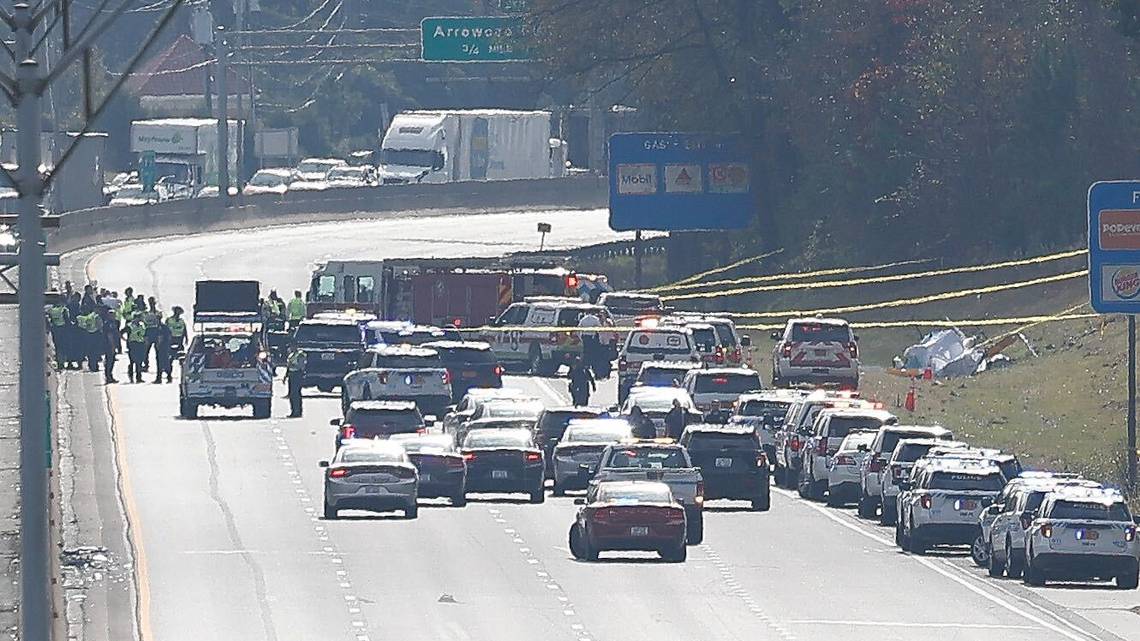 Police and fire trucks respond to a helicopter crash on Interstate 77 Tuesday near Tyvola Road in Charlotte. Two people were confirmed dead in the crash, , which involved a WBTV helicopter. ALEX SLITZ aslitz@charlotteobserver.com

Here’s what we know about the helicopter crash that killed two people Tuesday afternoon in Charlotte along Interstate 77.

WHO WERE THE VICTIMS?

Chip Tayag (left) and Jason Myers both died in a helicopter crash in Charlotte, North Carolina, on November 22, 2022.

Myers grew up in Union and Catawba counties and worked in Raleigh, Texas and Virginia before returning home to work at WBTV. He is survived by his wife, Jillian, and four children.

Tayag, a pilot with more than 20 years of experience, accepted a job as an ENG pilot with WBTV in 2017.

Robert Allen told the Observer that he was driving in the middle lane on I-77 southbound near the Tyvola Road bridge when he saw the helicopter just ahead of him coming down at a 45-degree angle. “It was going straight down, like in a nosedive,” he said. Allen said he was returning to his home on Rea Road after meeting a client at his engineering company’s uptown location. ”There was no trail of smoke behind the helicopter, no rotation,” he said, meaning it “wasn’t spinning out of control.”

WHAT CAUSED THE CRASH?

The cause of the crash is not yet known. Charlotte-Mecklenburg Police Chief Johnny Jennings said there was no indication of a fire, The Charlotte Observer reported.

Investigators with the Federal Aviation Administration and the National Transportation Safety Board, both federal agencies, are expected to arrive in Charlotte in response to the crash.

WHAT TYPE OF AIRCRAFT WAS INVOLVED?

In an emailed statement to the Observer, the FAA said the aircraft was a Robinson R44 helicopter, manufactured by the Robinson Helicopter Company.

With nearly 6,000 deliveries between 2001-2020, the R44 is the best-selling civilian helicopter in the world, according to data from the General Aviation Manufacturers Association.

HOW SAFE IS THE ROBINSON R44 HELICOPTER?

There have been multiple crashes involving Robinson helicopters since they were first introduced in 1979, news reports indicate.

After a string of fatal crashes involving the Robinson R22 and R44 in the 1980s and early 1990s, the Federal Aviation Administration issued Special Flight Aviation Regulation 73 in 1995, the Los Angeles Times reported. The law requires pilots to complete a minimum of 200 training hours before taking command of Robinson helicopters.

Since 2000, there have been 388 accidents involving the Robinson R44 in the U.S., including 71 where passengers sustained fatal injuries, according to data from the National Transportation Safety Board.

Though Robinson has blamed accidents on pilot inexperience, the Times reported causes of fatal crashes in the R44 have varied.

Of the 13 fatal accidents in the U.S. involving R44 helicopters from 2014-2018, three involved pilots hitting power lines and two were the result of improper maintenance of the aircrafts, pilot John Zimmerman wrote for AirFactsJournal, an online resource for information about air transportation.