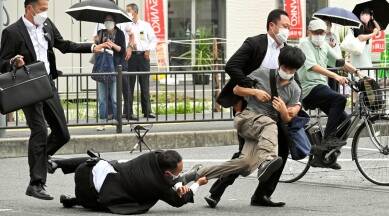 Japan’s former Prime Minister Shinzo Abe has died after being shot while campaigning in the city of Nara, according to hospital officials.

The NHK broadcaster and the Kyodo news agency first reported Abe’s death on Friday, hours after incumbent Prime Minister Fumio Kishida said the 67-year-old had been gravely wounded in the gun attack.

Police said a 41-year-old male suspect has been arrested at the scene.

Here’s what we know about the shooting so far.

Officials and local media said Abe was shot at 11:30am (02:30 GMT) while delivering a campaign speech on a street near the Yamato-Saidaiji Station in Nara, ahead of Sunday’s election for Japan’s Upper House.

The NHK broadcaster said its reporter on the scene heard two gunshots before Abe collapsed on the street.

It aired footage showing Abe clutching his chest, with his shirt smeared in blood.

The suspected gunman shot at the former prime minister from behind, the broadcaster added.

TBS Television, meanwhile, reported that Abe had been shot on the left side of his chest and apparently also in the neck.

Abe collapsed, visibly bleeding, and bystanders began to administer cardiac massage, witnesses said. The shooter was wrestled to the ground and taken into custody.

Where was Abe pronounced dead?

NHK and Kyodo news agency said Abe appeared to be in a state of cardiac arrest when airlifted to hospital, after having initially been conscious and responsive.

The Associated Press news agency quoted a local fire department official as saying that Abe was not breathing and said that his heart had stopped while being airlifted to hospital.

Hours later, Abe was pronounced dead by the hospital in the afternoon.

“Shinzo Abe was transported to [the hospital[ at 12:20pm. He was in a state of cardiac arrest upon arrival. Resuscitation was administered. However, unfortunately he died at 5:03pm,” said Hidetada Fukushima, the hospital’s professor of emergency medicine.

Video shows the moment former Japanese PM Shinzo Abe was shot from behind as he campaigned in the city of Nara. Abe was rushed to the hospital in critical condition.

Who is the suspect?

Local media have identified the suspect as Yamagami Tetsuya, a Nara resident. He was arrested at the scene on charges of attempted murder.

NHK said the suspected gunman had used a handmade gun in the attack and quoted defence sources as saying that he had worked for the Maritime Self-Defense Force for three years until 2005.

Kishida, the prime minister, said a motive for the attack was not yet clear. NHK, citing the police, said the suspect told investigators he was dissatisfied with the former prime minister and intended to kill him.

It was not clear why he was angry with Abe.

READ MORE: What we know about the 41-year-old suspect in Shinzo Abe’s shooting

What has been the reaction?

The shooting prompted shock and condemnation in Japan and around the world.

Kishida described the attack as “dastardly and barbaric” while US Secretary of State Antony Blinken called the shooting “a very, very sad moment”.

Some in Japan said the attack was especially “tragic and surprising” as political violence is rare in the country.

“This is certainly not something we are used to seeing in Tokyo. We never have this kind of gun violence. [We have] one of the lowest rates of homicide in the world,” Benoit Hardy-Chartrand, a professor at Japan’s Temple University, told Al Jazeera.

“So this comes as a shock to everyone, especially considering the stature of the importance of the victim of Abe Shinzo, one of the most important post-war politicians for Japan.”

Japanese officials said all election campaigns have been temporarily suspended.