The Louisiana State Police said Mr. Greene died in 2019 after crashing during a police chase, but video later showed troopers shocking, choking and beating him. Five officers have now been charged. 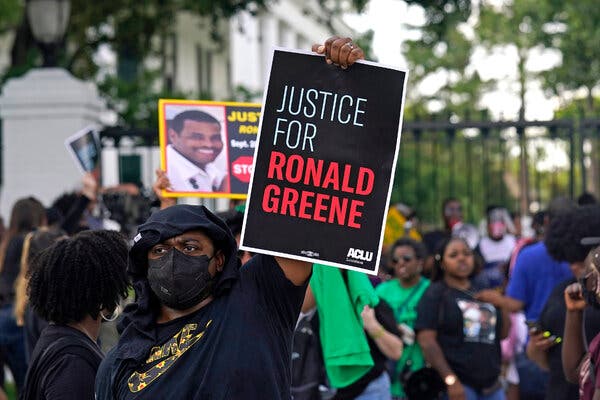 Demonstrators marched to the governor’s mansion from the Capitol in Baton Rouge, La., in May 2021. Credit…Gerald Herbert/Associated Press

More than three years after Ronald Greene, a Black man, died in police custody in Louisiana, five law enforcement officers were charged on Dec. 15 in connection with the deadly encounter.

The authorities initially said Mr. Greene had been pursued by troopers because of a traffic violation and that he had refused to stop and resisted arrest. His death, in May 2019, was ruled accidental and was attributed to cardiac arrest.

Two years later, The Associated Press published body-camera footage that showed Mr. Greene being beaten and left handcuffed and face down for more than nine minutes. His family commissioned its own autopsy, which found that he had sustained severe injuries to his skull and had wounds on his face.

The footage brought Mr. Greene’s case, which initially drew little notice, to national attention amid a series of cases in which Black men died during encounters with the police.

Here’s what we know about the case.

Who was Ronald Greene?

Mr. Greene, 49, lived in Monroe, La. He was married, worked as a barber, and had reportedly gone into remission after battling cancer for two years. He was on his way to meet his wife in Florida when he was pulled over just after midnight on May 10, 2019, by state troopers in Union Parish, east of Shreveport in northern Louisiana.

What was his family told about his death?

The authorities told Mr. Greene’s relatives that he died from injuries he sustained in a crash outside Monroe after he failed to stop immediately for a traffic violation, a lawyer for his family said.

The A.P. initially reported, citing the Union Parish coroner, that Mr. Greene’s death was ruled accidental and was attributed to cardiac arrest, and that the coroner’s file made no mention of any struggle with the police. 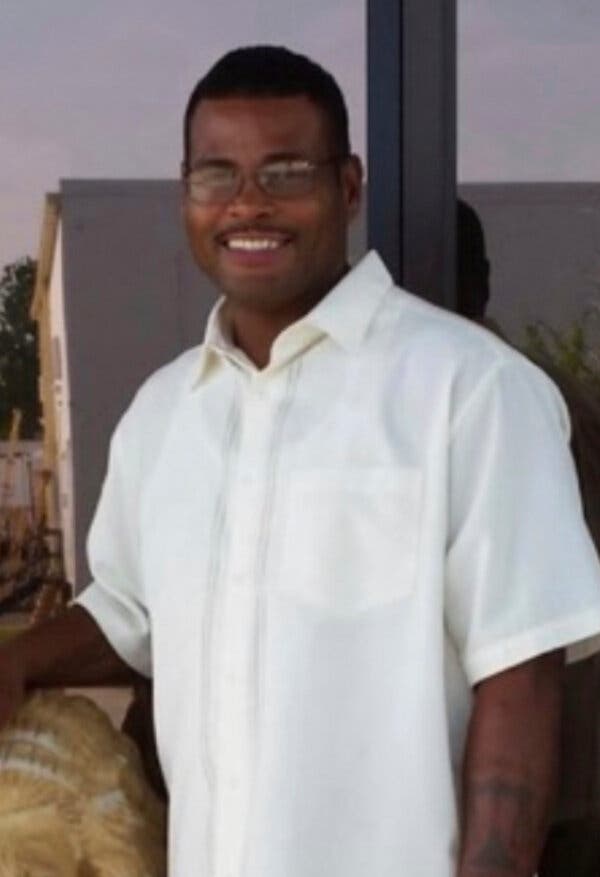 What does the body-camera footage show?

In May 2021, two years after Mr. Greene’s death, The A.P. obtained body-camera footage of the episode and published three excerpts . The footage shows Mr. Greene’s S.U.V. stopped on the side of the road. Troopers are seen opening his vehicle and jolting Mr. Greene with a stun gun, and Mr. Greene is heard to scream “I’m sorry” and “I’m scared.”

According to The A.P., which said it had obtained 46 minutes of video footage from the encounter, one trooper wrestled Mr. Greene to the ground, put him in a chokehold and punched him in the face. Another trooper is seen briefly dragging Mr. Greene by shackles on his ankles as he lay on the ground.

In the clips published by the A.P., covering more than two minutes, Mr. Greene is seen being jolted again with a stun gun while lying handcuffed on the ground.

The A.P. reported that the troopers, who were white, left Mr. Greene lying facedown and moaning for more than nine minutes, as they wiped blood from their hands and faces. “I hope this guy ain’t got AIDS,” one of the troopers is heard to say, adding an expletive.

Video from several minutes later shows Mr. Greene limp, unresponsive and bleeding from his head and face, and he is then seen being loaded onto an ambulance gurney with his arm cuffed to a bedrail, according to The A.P.

Did the entire footage become public?

The Louisiana State Police had described the release of the footage obtained by The A.P. as “premature” and unauthorized, and a state police spokesman said the agency could not yet release it because the encounter was the subject of an administrative and criminal investigation.

But two days after The A.P. published excerpts, the state police released what they said was all of the video of the encounter, including a 46-minute clip and additional footage from body and dashboard cameras. Col. Lamar A. Davis, the state police superintendent, said the parts that had been released without official authorization had not been “provided to the public in its full capacity, or context.”

What do the police say happened?

Mr. Greene’s family said state troopers initially told them that Mr. Greene died on impact after crashing his vehicle into a tree during the chase, according to The A.P.

A single-page crash report, released later by the state police and reviewed by The A.P., said that troopers tried to stop Mr. Greene for an unspecified traffic violation, but that he refused to pull over and troopers pursued him.

The report says that the chase ended when Mr. Greene’s vehicle crashed; that he was taken into custody after struggling with troopers; and that he became unresponsive and died on the way to a hospital, The A.P. reported. The news agency said the crash report did not mention any use of force by troopers.

The state police later released a statement acknowledging that the troopers did use force in the encounter, and saying the use of force was justified. It did not open an internal investigation until 474 days after Mr. Greene’s death, according to The A.P. 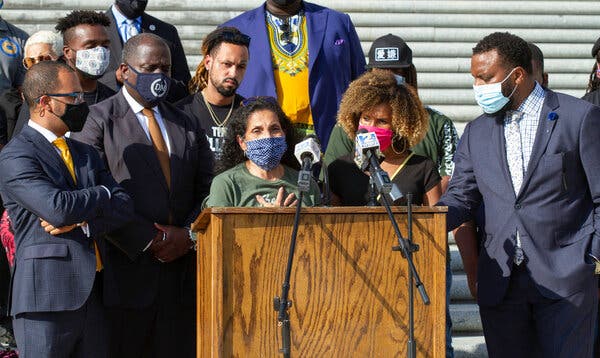 What does the Greene family say happened?

Mr. Greene’s family sued the police for wrongful death in May 2020, arguing that he had died as a result of a struggle with troopers that “left him beaten, bloodied and in cardiac arrest.”

In their lawsuit, Mr. Greene’s relatives said that there was no sign that the front of Mr. Greene’s vehicle had struck anything, and that his airbag had not deployed.

The suit alleges that two troopers pinned Mr. Greene down and shocked him three times with a Taser while he begged them to stop. Emergency medical technicians who were called to the scene found Mr. Greene unresponsive, with several stun-gun barbs stuck in his body, according to the lawsuit. Included in the court papers are photos that circulated online, appearing to show Mr. Greene’s bruised and bloodied face.

The family commissioned an independent autopsy that found severe injuries to Mr. Greene’s head and skull and several wounds to his face, the family’s lawyer said. After examining the damage to Mr. Greene’s vehicle, which was mostly on the rear driver’s side, an accident reconstruction expert concluded that it was inconsistent with a fatal collision, the lawyer said.

In 2020, federal authorities opened a civil rights investigation into Mr. Greene’s death. In June of this year, the Justice Department announced that it had initiated a broader investigation into the Louisiana State Police over accusations of officers engaging in abusive and discriminatory behavior.

What has happened to the officers involved?

The charges announced on Dec. 15 — which include a single count of negligent homicide for one of the five officers — came from an indictment handed up by a state grand jury in Louisiana, officials and lawyers for Mr. Greene’s family said.

The state police said two troopers had been placed on administrative leave because of the indictment. One of them, Master Trooper Kory York, was charged with the most serious offenses, including negligent homicide and 10 counts of malfeasance in office. (Trooper York had previously received a 50-hour suspension and returned to active duty.) The other, Lt. John Clary, who was charged with malfeasance in office and obstruction of justice, was the highest-ranking trooper at the scene.

Two others with the state police, Trooper Dakota DeMoss and Capt. John Peters, were both charged with obstruction of justice. Christopher Harpin, a Union Parish sheriff’s deputy, was also named in the indictment, charged with three counts of malfeasance in office.

Trooper DeMoss was placed on leave last year after he was arrested in an unrelated case, in which he and three other troopers were charged with using excessive force and deactivating body cameras during arrests.

Another trooper involved in the arrest, Chris Hollingsworth, was killed in a single-vehicle highway crash in 2020. The A.P. reported at the time that he had been notified hours earlier that he would be fired for his part in Mr. Greene’s fatal arrest.