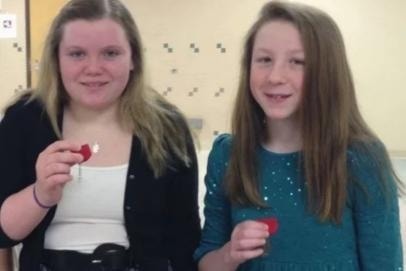 Teenagers Libby German and Abby Williams were murdered back in February 2017. On Friday, a man was finally arrested in connection to the case, reports Rachel Sharp 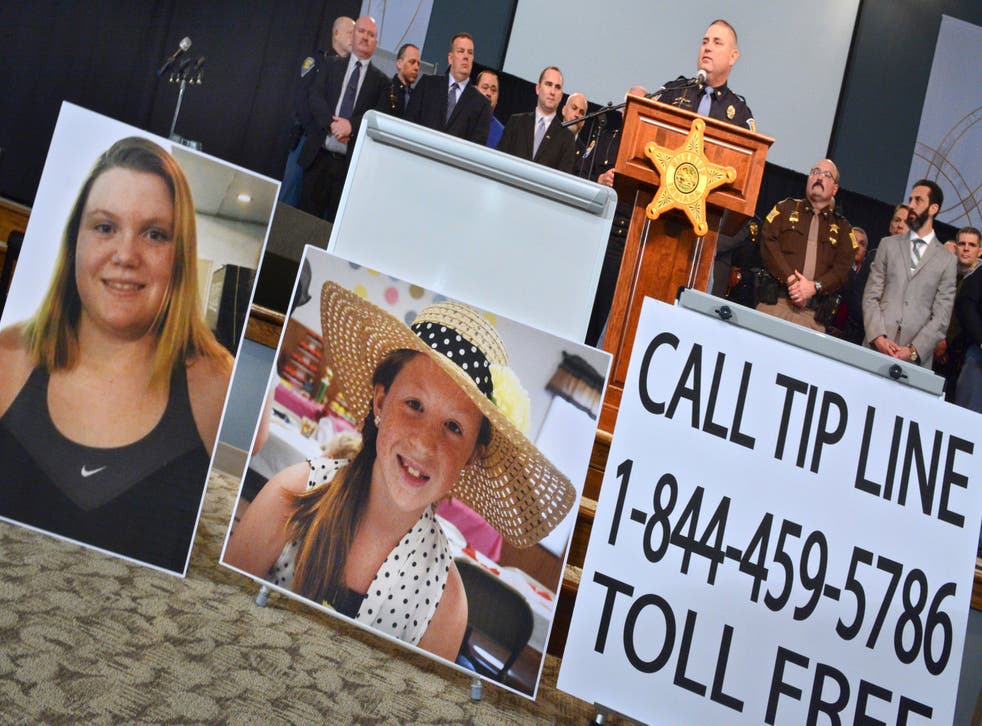 It’s been more than five years since best friends Libby German, 14, and Abby Williams, 13, set off on a walk in their hometown of Delphi, Indiana – never to be seen alive again.

Since then, several local men have fallen under suspicion for their murders.

But no arrests were made, no suspects formally named and one promising lead after the next went cold. Until now.

For the first time, a man has been arrested in connection to the 2017 murders of the teenagers.

Richard Allen, a 50-year-old married Delphi man, was taken into custody on Friday and booked into Carroll County Jail. He has since been moved to a state facility for his own safety.

It is currently unclear what he has been charged with but law enforcement sources have described it as a “major development” in the case that has rocked the close-knit Indiana community for more than half a decade and left the girls’ families desperate for answers.

As news of the arrest broke, Libby’s sister Kelsi German tweeted that “today is the day” they had been waiting for.

“Just know how grateful I am for all of you. No comments for now, any questions please refer to the Carroll county prosecutor’s office. There is tentatively a press conference Monday at 10am. We will say more then. Today is the day,” she said.

In a follow-up tweet, she added: “Nothing is confirmed at this time.”

Officials are remaining tightlipped about the development but have scheduled a press conference for Monday morning to give an update on the case.

Investigators from Indiana State Police as well as members of Libby and Abby’s families are expected to speak at the briefing.

What happened to Libby and Abby?

Libby and Abby went missing on 13 February 2017 after they set off on a hike along the Monon High Bridge Trail in Delphi, Indiana.

Their bodies were discovered the next day in a wooded area around half a mile off the trail.

For years, police have refused to say how the girls died and have revealed few details about the crime scene.

However, shocking new details about the murders came to light in a search warrant application obtained by podcast The Murder Sheet and shared with The Independent back in May. 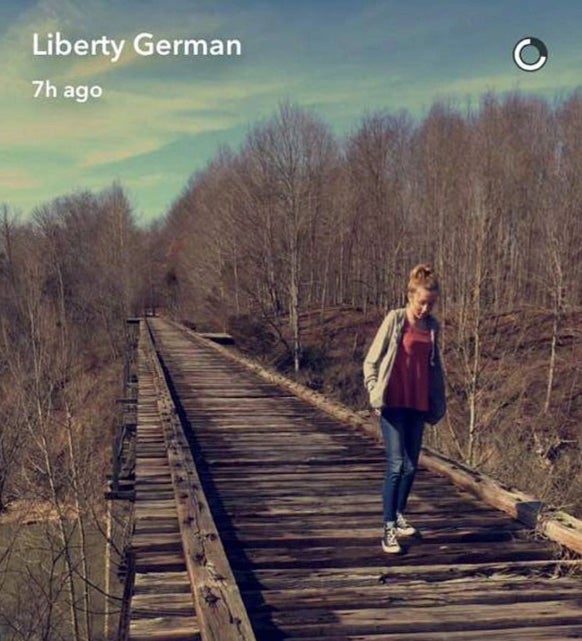 The warrant, filed by an FBI agent investigating the murders back in 2017 and partly redacted, was to carry out a search on the home of a local man Ronald Logan.

In it, the agent revealed that the girls had lost “a lot” of blood during their deaths and that their killer is believed to have moved and staged their bodies, before taking some sort of souvenir from the scene.

For the first time, the warrant also revealed that the teenagers had been killed by some type of weapon. The word for the weapon was redacted in the document.

The murderer would have been covered in the victims’ blood in the aftermath of the slayings due to the “large amount of blood was lost by the victims at the crime scene”, it reads.

“Because of the nature of the victim’s wounds, it is nearly certain the perpetrator of the crime would have gotten blood on his person/clothing.”

Abby and Libby are believed to have been killed in another location, before their murderer then moved their bodies to where they were found, the surfaced documents show.

On the day the girls went missing, Libby had posted photos on Snapchat of her and Abby walking along the trail.

The happy image of the two best friends is believed to be the last photo of them before they died.

In a move that propelled the investigation forward, Libby also captured a grainy video on her phone of a man dressed in blue jeans, a blue jacket and a cap walking along the abandoned railroad bridge.

Investigators released a grainy image from the video and a chilling audio of the man telling the two girls: “Go down the hill.” 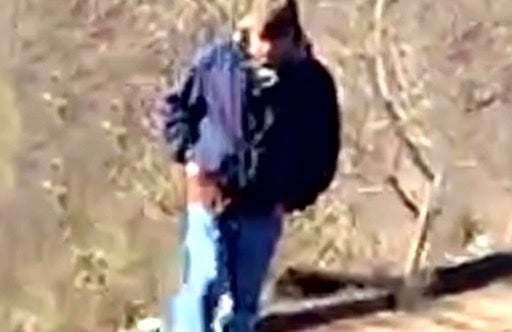 This grainy image was taken on Libby’s phone on the trail the day the girls went missing. Investigators believe the man is the killer

Investigators have long suspected that this man is the girls’ killer and have praised the girls for documenting the video as evidence.

Up until now, the man has never been identified.

Multiple police sketches were circulated of a man matching the description of the man in the footage.

Who is Richard Allen?

It is not clear what information has led to Mr Allen’s arrest now, more than five years on from the 2017 slayings.

In August, Indiana State Police were spotted searching the Wabash River in Peru – around 40 minutes east of Delphi – in connection to the case.

At the time of the murders, Mr Allen would have been 44 years old.

The 50-year-old is a local resident of Delphi, where the teenage girls lived with their families.

According to online records, Mr Allen has lived in Delphi since at least 2006, and in Indiana his whole adult life.

He is married and works as a pharmacy technician, receiving his most recent pharmaceutical licence in February 2018 – one year on from the murders. 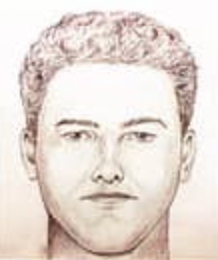 A local resident told Fox59 that Mr Allen currently works at the local CVS store – coming into contact with members of the community as part of his job.

“When I will go into CVS as a customer myself, he would say ‘do you need any help?’ I would be like ‘no’,” said Chandler Underhill, the manager of the local Brick & Mortar Pub, where he said Mr Allen was a regular.

“Just like a normal guy that I’ve seen for the last couple years, not really thinking anything.”

Mr Underhill said that Mr Allen always seemed “normal” when he would come into the pub where he works.

“I would talk; he wouldn’t say much. He seems like a normal guy,” he said.

“One of my servers was telling me that he wouldn’t speak much.”

Mr Allen appears to have no prior criminal record.

However, the Carroll County Jail record lists Mr Allen as also going by the alias of Craigh Ross Rentfrow.

Other names tied to the case

The arrest of Mr Allen marks the very first time his name has been publicly tied to the unsolved murders.

Over the years, authorities have honed in on several other men. 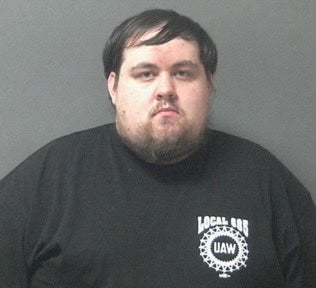 The profile was used from 2016 to 2017 on platforms including Snapchat and Instagram and used photos of a known male model, portraying him as being extremely wealthy and owning numerous sports cars.

Investigators said the person behind the account was Kegan Anthony Kline, 27-year-old man with addresses in Kokomo and Peru, close to Delphi.

According to an affidavit, Kline posed as the model in order to groom underage girls and get them to send nude photos and their addresses and try to get them to meet him. The male model whose photos were used had no connection to the case.

Kline was arrested on charges of child sexual abuse images and child exploitation tied to the account in 2020.

He allegedly admitted to investigators that he groomed underage girls online.

The affidavit said that Indiana State Police and the FBI carried out a search warrant on 25 February 2017 – less than two weeks after Abby and Libby were murdered – at Kline’s home in Peru after tracking down the user of the anthony_shots profile to the property.

Kline allegedly told investigators he would use social media accounts to talk to underage girls and had exchanged messages with and received about 100 sexual photos and about 20 sexually explicit videos from around 15 underage girls. 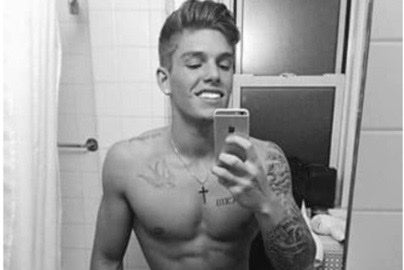 However, he denied any knowledge or involvement in the two teenagers’ deaths.

Kline was charged with 30 felonies in 2020 over the case.

The documents, filed in 2020 and heavily redacted, do not mention the murders of Libby and Abby and he was not accused of involvement in their deaths.

Libby’s grandmother Becky Patty told The Independent in December that the teenager had never mentioned speaking to anyone online prior to her death and that there had never been any indication that the two girls had arranged to meet anyone online the day they were killed.

“Up until last night we were all under the impression that there was no indication and even now, as far as I’m aware, there is no indication that the girls had any plans to meet anyone out there [on the trail],” she said.

Ms Patty, who raised Libby from the age of three along with her husband Mike Patty, also said she had never heard of Kline before investigators released the information about the social media profile to the public.

However, after so many leads had gone cold she said she was not going to get her “hopes up” that it was the breakthrough the families had been waiting for.

Investigators urged anyone who had communicated with, met, or attempted to meet the individual posing as anthony_shots to come forward with information.

Prior to this, Mr Logan had previously been on police radar, according to the 2017 search warrant application. 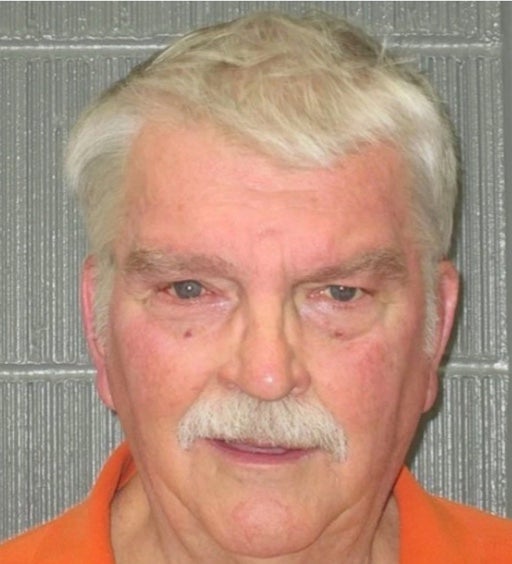 Mr Logan owned the land on which Libby and Abby’s bodies were found and his home was just 1,400 feet from the crime scene.

The warrant application cites multiple complaints that he was violent towards women and that he owned multiple weapons, including handguns and knives.

Mr Logan also allegedly lied about where he was at the time that the teenagers disappeared.

He told investigators that he was picked up by a friend around 2pm on 13 February and driven to an aquarium store, returning hours later at around 5pm, the document states.

The friend confirmed the alibi – before admitting two days later that Mr Logan had made up the story and asked him to lie.

Instead, cellphone location data placed Mr Logan in the area around the trail at the time Abby and Libby disappeared.

The document also says that his voice was “not inconsistent” with the man captured in the video by Libby.

Mr Logan was never charged and he died in 2020, before the case was solved.

More than five years on from the murders, news that an arrest has finally been made has raised hopes among the Delphi community that there can finally be closure in the case.

Local store owner Laura Greene said that the community has never been the same after the murders.

“It’s had a big effect. I mean in the beginning we didn’t trust people we were always looking behind our back,” she told Fox59.

“For many we spoke to, the worst revelation today was that the suspect was one of their own.

“For those of us who came in contact with this suspect it’s kind of eerie.”

Finally having a breakthrough in the case was a positive day for the community, she said. 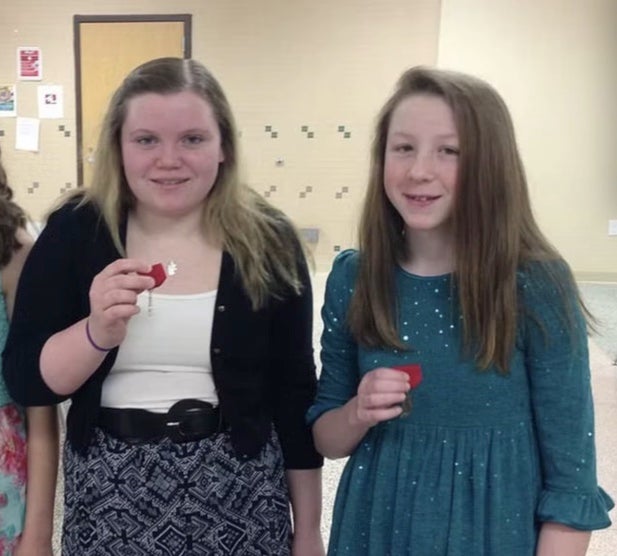 “Despite their grief, and maybe they found that in their grief, to never give up and never quit. I mean they have built softball fields to bring awareness to their children and it’s just a beautiful thing that they are just so strong,” she said.

However, even if the development does bring some closure to the case, the families of Libby and Abby will never have closure from what happened, she said.

“It doesn’t heal the hurt or, you know, change anything for the families, but maybe this will bring some sort of ease to them.”

New Photo Shows Man Reportedly Arrested in Connection with Delphi Murders as Neighbors React: ‘I Would Talk; He Wouldn’t Say Much’