A previous version of this story incorrectly associated a different suspect in this case. That suspect is not associated with the murder of Young Dolph. We regret any confusion.

Law enforcement has announced the name of a man wanted in connection to the murder of Memphis rapper Young Dolph.
According to the U.S. Marshals Service, 23-year-old Justin Johnson is alleged to have shot Young Dolph, whose real name is Adolph Robert Thorton Jr., to death at Makeda’s Homemade Cookies on Nov. 17, 2021.
The U.S. Marshals, who are working with Memphis Police and the Tennessee Bureau of Investigation on this case, said that Johnson is wanted for first-degree murder for Young Dolph’s death.

According to the U.S. Marshals, since Johnson has been able to evade arrest, law enforcement agencies are now offering a combined reward of $15,000 for information that leads to his arrest.

Johnson has been added to the TBI’s “Most Wanted” list.

The U.S. Marshals said that Johnson is 23 years old, about 5-foot-8 and 190 pounds and has the name “Jaiya” tattooed on his right arm.

THE DEATH OF YOUNG DOLPH

Adolph Robert Thornton Jr., known to his fans as Young Dolph, was gunned down in broad daylight at Makeda’s Homemade Cookies in Memphis, his hometown, on Nov. 17, 2021.

Two people pulled up to the bakery and jumped out of a white Mercedes, ran past Young Dolph’s camouflage Corvette, up to the window and opened fire. 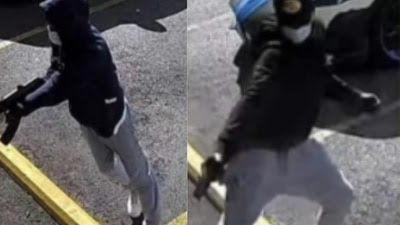 By the time paramedics arrived, Young Dolph was dead.

Maurice Hill, the owner of the shop where the shooting happened, Makeda’s Butter Cookies, told FOX13 his employees said Young Dolph, 36, walked into the store to buy cookies. Someone then drove up and shot and killed him at the Memphis bakery.

Immediately after the shooting, hundreds of people flocked to the area as headlines broke across the world. Tensions flared and raw emotion spilled over. People laid on the ground, crying. Some onlookers called for an end to gun violence and peace. Others cursed and expressed anger at the loss of the Memphis icon.

The next day, a makeshift memorial began growing outside of the boarded-up cookie shop, paying tribute to the Memphis rapper who was also well known for giving back to his former high school in Memphis, Hamilton High School, and passing out turkeys throughout the city on Thanksgiving. 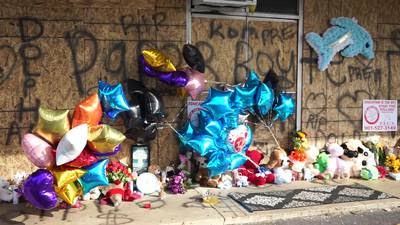 He had been scheduled to pass out turkeys at St. James Missionary Baptist Church the following Friday between 2-5 p.m.

Memphis Police found the car driven by the suspects in Young Dolph’s shooting on Saturday, Nov. 20 in the 1100 block Bradley in Orange Mound.

THE LEGACY OF YOUNG DOLPH

On Wednesday, Nov. 24 — one week after the rapper’s death — Young Dolph’s family released a statement.

“There are no words that exist, that sufficiently express the pain we are feeling as a family. Losing Adolph, Dolph, Man-Man, changes our lives forever. And while we will take each day as it comes, we are comforted in knowing that he leaves a legacy that reflects his heart. A heart that was for his family. A heart that was for the people.”

Young Dolph’s record label, Paper Route Empire, carried out one his annual turkey giveaways on Thanksgiving Day, continuing the rapper’s legacy of giving back to the community.

Young Dolph was laid to rest Tuesday, Nov. 20. A service was held at First Baptist Church Broad Street. Then the family’s caravan of black SUVs was escorted by security and Memphis Police to the cemetery across from Hamilton High School, Young Dolph’s alma mater.

On Dec. 16, a public ceremony was held at the FedExForum where fans had the chance to say goodbye to the beloved rapper.