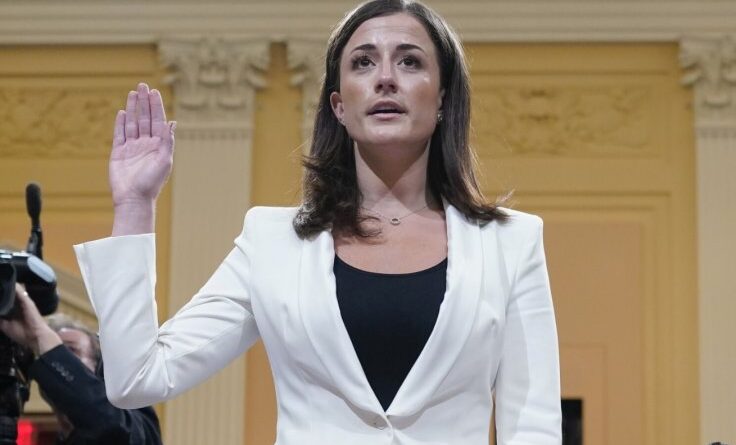 Hutchinson claimed in her testimony that Trump wrestled with a Secret Service agent and attempted to grab the wheel of the car he was traveling in, in an effort to divert his motorcade to the Capitol, where his supporters were assembling.

The January 6 Committee hearing had a surprise guest on Tuesday and her testimony might invite more trouble for former President Donald Trump. Cassidy Hutchinson, 25, a former top aide to Trump’s White House chief of staff Mark Meadows, testified on Tuesday following an unexpected and last moment announcement from the committee on Monday.

Cassidy Hutchinson’s name wasn’t heard before but after her Tuesday’s testimony, she is now being compared to John Dean â€“ the White House counsel who turned on President Richard Nixon during Watergate. In Hutchinson, the January 6 Committee has now turned up a surprisingly potent witness. But who is Cassidy Hutchinson?

The committee announced the unscheduled hearing on Monday, stating that it would present “recently obtained evidence” from an anonymous witness who would eventually be identified as Hutchinson. Hutchinson is the first live witness for the committee who was present in the West Wing on January 6, 2021.

“It’s important that the American people hear that information immediately,” the committee chairman, Rep. Bennie Thompson, said before the hearing started. He also thanked Hutchinson for showing the courage to testify.

As his supporters moved on to the U.S. Capitol on Jan. 6, 2021, an irate President Donald Trump tried to grab the steering wheel of the White House limousine when he was told he would not be taken to the Capitol, former aide Cassidy Hutchinson testified https://t.co/VF0lu3NWKp pic.twitter.com/qt3oFCvxFN

Hutchinson then raised a storm with what she said. Hutchinson claimed in her testimony that Trump wrestled with a Secret Service agent and attempted to grab the wheel of the car he was traveling in, in an effort to divert his motorcade to the Capitol, where his supporters were assembling.

She mentioned how the possibility of violence was communicated to White House officials. Moreover, she claimed that Trump personally knew that some of the attendees at his morning rally close to the White House were armed because they were being turned away by Secret Service agents – and yet he still directed them to the Capitol.

This is perhaps the most damning testimony to date.

“I don’t [expletive] care that they have weapons. They’re not here to hurt me,” Hutchinson said she heard the president say. “Let my people in. They can march to the Capitol from here.”

Hutchinson’s claims are also being questioned now. Following her testimony, a Secret Service insider told CBS News that the agent and driver who were in the car with Trump were both willing to swear under oath that the former president did not physically attack them or attempt to grasp the wheel.

Even then, Hutchinson has emerged as a hero after appearing in front of the committee and is being praised by millions.

Hutchinson’s association with the White House goes back a long time. In 2018, Hutchinson, a rising college senior, who was only 22 years old, began working as a summer intern in the White House under the Trump administration.

Soon, she found herself working in the chief of staff’s office as an ever-present staffer with similar aspirations for a career in politics as so many others in Washington.

Hutchinson attended Christopher Newport University, a public school in Virginia, where she majored in political science and American studies, according to her LinkedIn profile. St. Andrew’s Episcopal School in Austin, Texas, is likewise covered on Hutchinson’s website.

She also spoke about her internship days in an interview with her school’s website. “I attended numerous events hosted by the president, such as signing ceremonies, celebrations and presidential announcements, and frequently watched Marine One depart the South Lawn from my office window,” she said, according to a 2018 article on the school’s website.

Additionally, Hutchinson worked as an intern for two prominent members of a hard-right political party: Ted Cruz, the senator from Texas, and Steve Scalise, the House Republican whip.

Rep. Liz Cheney, vice chair of the committee, stated during the hearing on Tuesday that Hutchinson started working at the White House’s legislative affairs office in 2019. In March 2020, Hutchinson received a promotion to chief of staff for Trump, Mark Meadows, where she remained until the conclusion of the Trump administration.

Meadows, Hutchinson’s previous boss, first toyed with cooperating with the committee before declining. For criminal contempt of Congress, the committee reported him to the Department of Justice (DoJ). The DoJ decided against pressing charges.

In a string of contentious sessions, Hutchinson’s testimony has now taken center stage in Meadows’ absence.

According to the Washington Post, Hutchinson recently changed attorneys, exchanging a former ethics counsel for Trump in the White House for a person with connections to Jeff Sessions, the former senator from Alabama who was dismissed as attorney general by Trump in 2018.