“Mr. Mayor, let me say to you I’m a victim of your mental health program in New York City,” James says in a video earlier this year, adding he is “full of hate, full anger and bitterness”

Even as police arrested Frank James on Wednesday in the Brooklyn subway shooting that wounded 10 people, they were still searching for a motive from a flood of details about the 62-year-old Black man’s life. An erratic work history. Arrests for a string of mostly low-level crimes. A storage locker with more ammo. And hours of rambling, bigoted, profanity-laced videos on his YouTube channel that point to a deep, simmering anger.

James posted dozens of videos ranting about race, violence and his struggles with mental illness. One stands out for its relative calm: A silent shot of a packed New York City subway car in which he raises his finger to point out passengers, one by one.

“This nation was born in violence, it’s kept alive by violence or the threat thereof, and it’s going to die a violent death,” says James in a video where he takes on the moniker “Prophet of Doom.”

After a 30-hour manhunt, James was arrested without incident after a tipster — thought by police to be James himself — said he could be found near a McDonald’s on Manhattan’s Lower East Side. Mayor Eric Adams triumphantly proclaimed “We got him!” after the arrest.

Police said their top priority was getting the suspect, who has since been charged, off the streets as they investigate their biggest unanswered question: Why?

A prime trove of evidence, they said, is his YouTube videos. He seems to have opinions about nearly everything — racism in America, New York City’s new mayor, the state of mental health services, 9/11, Russia’s invasion of Ukraine, and Black women.

A federal criminal complaint cited one in which James ranted about too many homeless people on the subway and put the blame on New York City’s mayor.

“What are you doing, brother?” he said in the video posted March 27. “Every car I went to was loaded with homeless people. It was so bad, I couldn’t even stand.”

James then railed about the treatment of Black people in an April 6 video cited in the complaint, saying, “And so the message to me is: I should have gotten a gun, and just started shooting.”

In a video posted a day before the attack, James criticizes crime against Black people and says things would only change if certain people were “stomped, kicked and tortured” out of their “comfort zone.”

Police say fellow riders heard him say only “oops” as he set off one smoke grenade in a crowded subway car as it rolled into a station. He then set off a second smoke grenade and started firing, police said. In the smoke and chaos that ensued, police say James made his getaway by slipping into a R-train going the opposite direction and exited after the first stop.

Frank James, 62, will be arraigned in Brooklyn federal court. If found guilty, he faces up to life in prison. NBC New York’s Jonathan Dienst reports.

Left behind at the scene was the gun, extended magazines, a hatchet, detonated and undetonated smoke grenades, a black garbage can, a rolling cart, gasoline and the key to a U-Haul van, police said.

That key led investigators to James, and clues to a life of setbacks and anger as he bounced among factory and maintenance jobs, got fired at least twice, moved among Milwaukee, Philadelphia, New Jersey and New York.

Investigators said James had 12 prior arrests in New York and New Jersey from 1990 to 2007. The nine prior NYC arrests from 1992 to 1998 include possession of burglary, criminal sex act, and theft of service.

In New Jersey, James has three other arrests in 1991, 1992, and 2007, including for trespass, larceny, and disorderly conduct, police said during Wednesday’s press conference.

James had no felony convictions and was not prohibited from purchasing or owning a firearm. Police said the gun used in the attack was legally purchased at an Ohio pawn shop in 2011. A close up image of that gun he purchased showed that he tried to obliterate the serial number on it, investigators said. But agents used that number to trace the purchase back to him.

A search of James’ Philadelphia storage unit and apartment turned up at least two types of ammunition, including the kind used with an AR-15 assault-style rifle, a taser and a blue smoke cannister.

Police said James was born and raised in New York City. In his videos, he said he finished a machine shop course in 1983 then worked as a gear machinist at Curtiss-Wright, an aerospace manufacturer in New Jersey, until 1991 when he was he was hit by a one-two punch of bad news: He was fired from his job and, soon after, his father whom he had lived with in New Jersey died.

Records show James filed a complaint against the aerospace company in federal court soon after he lost his job alleging racial discrimination, but it was dismissed a year later by a judge. He says in one video, without offering specifics, that he “couldn’t get any justice for what I went through.”

A spokesperson for Curtiss-Wright didn’t immediately respond to a call seeking comment.

James describes going in and out of several mental health facilities, including two in the Bronx in the 1970s.

“Mr. Mayor, let me say to you I’m a victim of your mental health program in New York City,” James says in a video earlier this year, adding he is “full of hate, full anger and bitterness.” 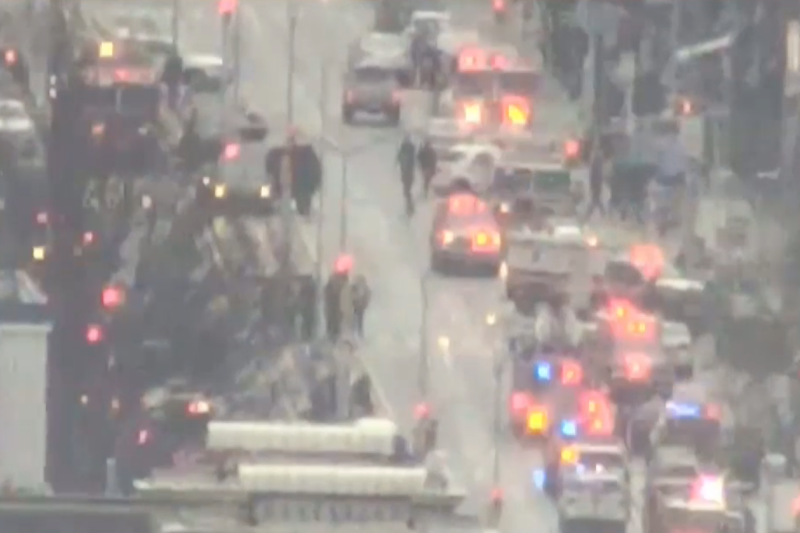 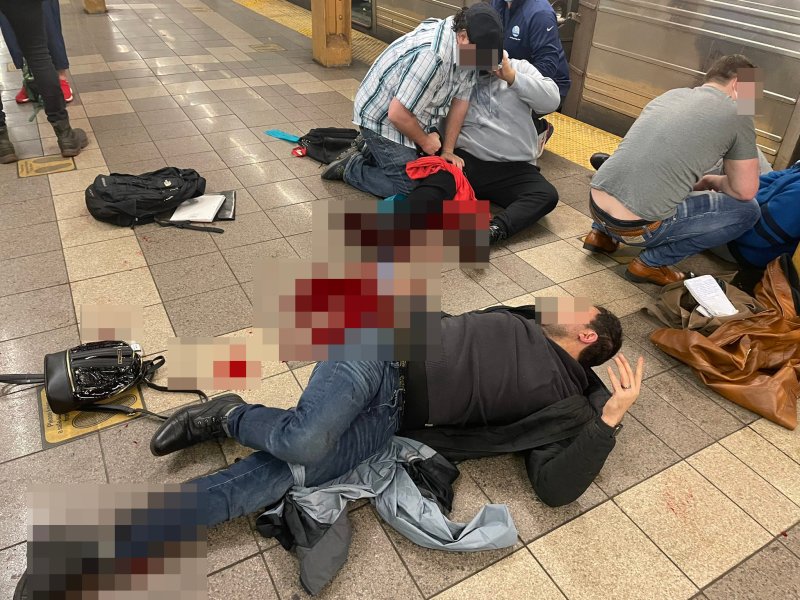 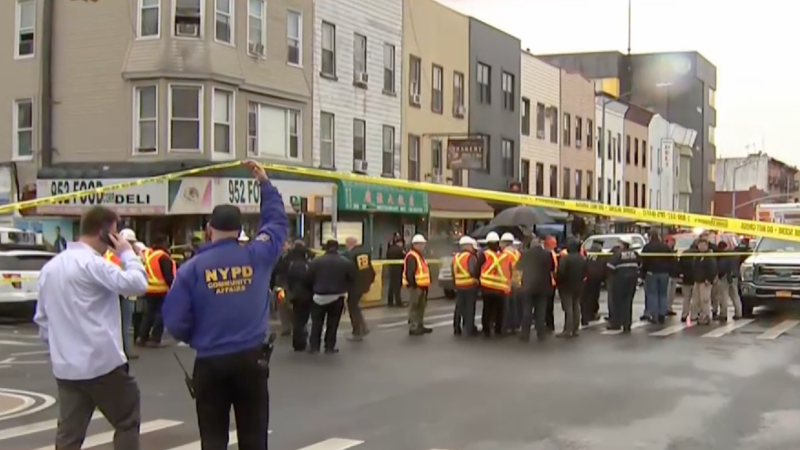 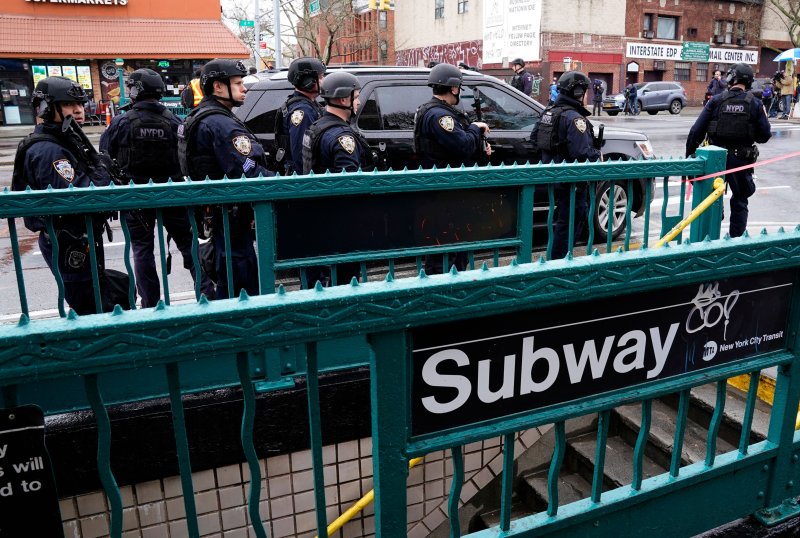 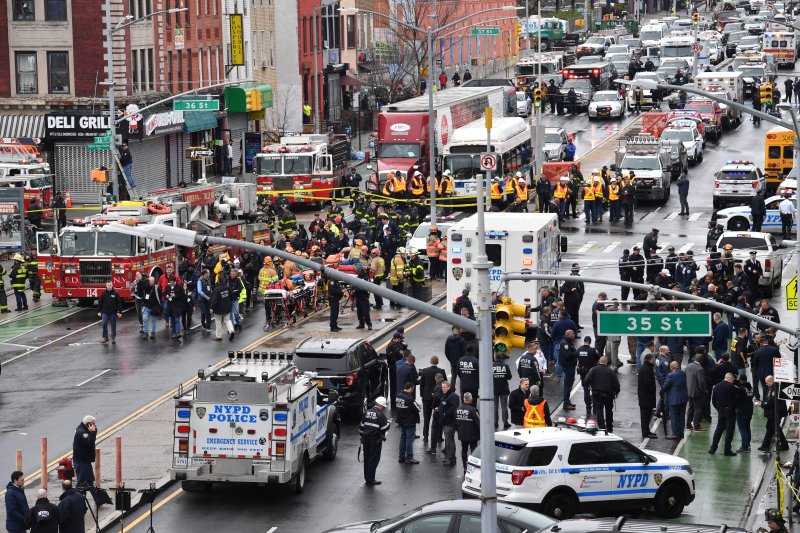 Police and first responders swarm the Brooklyn neighborhood of Sunset Park in New York, after multiple people were shot or hurt at the height of morning rush hour, April 12, 2022.

James says he later was a patient at Bridgeway House, a mental health facility in New Jersey, although that could not be immediately confirmed. Messages left with the facility were not returned.

“My goal at Bridgeway in 1997 was to get off Social Security and go back to f—— work,” he says in a video, adding that he enrolled in a college and took a course in computer-aided design and manufacturing.

James says he eventually got a job at telecommunications giant Lucent Technologies in Parsippany, New Jersey, but says he ended up getting fired and returned to Bridgeway House, this time not as a patient but as an employee on the maintenance staff. A message seeking comment was sent to Lucent Technologies.

“I just want to work. I want to be a person that’s productive,” he said.

Touches of that earnest, struggling man showed up after James’ parked car was hit in Milwaukee. Eugene Yarbrough, pastor of Mt. Zion Wings of Glory Church of God in Christ next door to James’ apartment, said James was impressed that the pastor owned up to hitting the car. Neither James nor anyone else was there to see the accident. And James called him up to say so.

“I just couldn’t believe it would be him,” Yarbrough said. “But who knows what people will do?”

Police and federal agents said that James has had no steady job or fixed address for the past few years. After renting the U-Haul van Monday afternoon in Philadelphia, using his own name, he apparently slept in it — as police later removed bedding, pillows and chairs in the hours after the shooting.