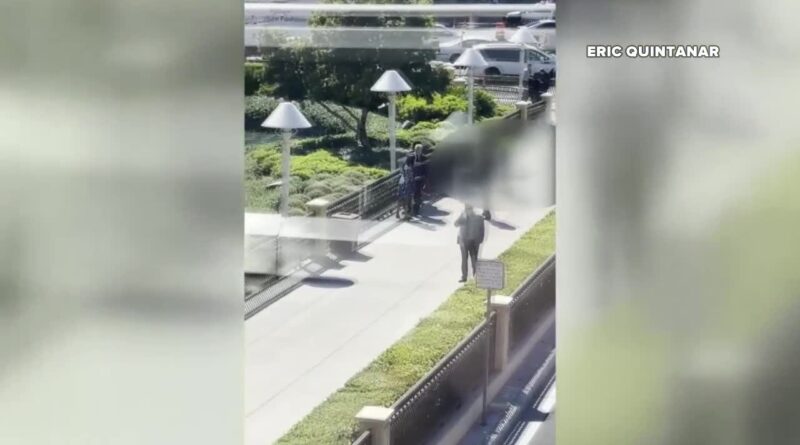 A suspect was taken into custody on Thursday afternoon by Las Vegas police after stabbing at least eight individuals, killing two, on the Las Vegas Strip.

LAS VEGAS (KTNV) — Video from witnesses shows what unfolded on the Las Vegas Strip in the moments after a man stabbed at least eight people on Thursday morning.

Two of the victims have died, Capt. Dori Koren with the Las Vegas Metropolitan Police Department confirmed. At least three more are said to be in critical condition.

Watch: Video shared with KTNV by Eric Quintanar shows one of the crime scenes on the Las Vegas Strip:

Several of the victims are believed to be showgirls who pose for photos with tourists on the Strip. Witnesses who spoke with KTNV reporters described the aftermath of the attack, in broad daylight on streets packed with pedestrians:

Pierre Fandrich, visiting Las Vegas from Montreal, Canada, watched as two of the victims were carried on stretchers to waiting ambulances after the attack.

Watch: Video from Pierre Fandrich shows one of the victims being wheeled to an ambulance on a stretcher:

Speaking through a translator, Fandrich says he was walking along the strip when he thought he heard “three or four showgirls laughing,” though it turned out to be screaming.

At first, Fandrich says he “thought a girl fell from the bridge because there was a lot of blood on the ground.”

Fandrich says he saw one of the women lying in a pool of blood while another woman tried to help her, despite being stabbed herself.
Another person approached them and attempted to help the woman on the ground by performing chest compressions until the police arrived.

Watch: Another victim is carried from the scene on a stretcher. Video provided by Pierre Fandrich:

Fandrich tells KTNV not see the suspect in the aftermath because “everything happened so fast.”

The stabber was arrested shortly after the attack and is being questioned by police, LVMPD officials said. He had not been publicly identified as of this report.